Just an Old-Time Catholic League Football Game, Except Time Not on Jays’ Side

Jays Are Held Scoreless in Second Half as Raiders Win with a Field Goal, 10-7 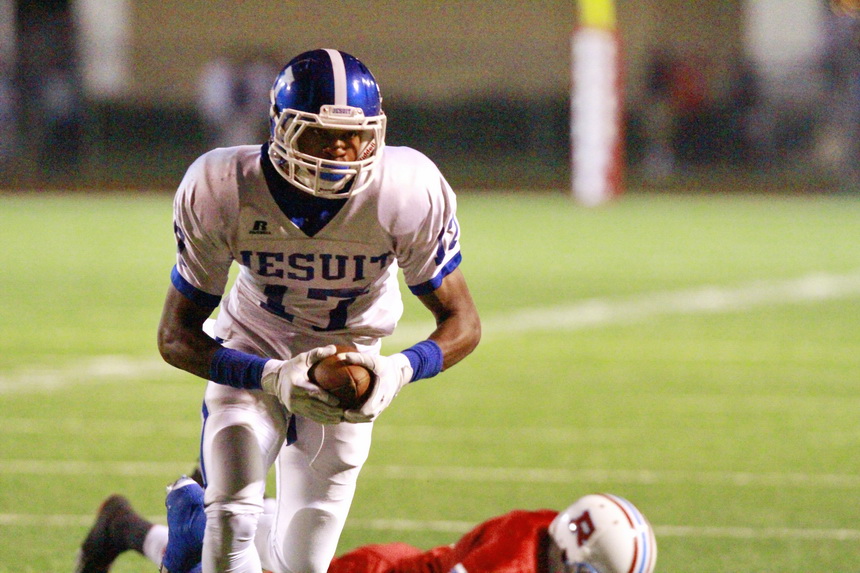 After catching a short pass, Kalija Lipscomb sheds a Raider defender and runs 15 yards into the end zone for the Jays’ only touchdown of the game.

Fans at the annual fall battle waged between Jesuit and Rummel at Joe Yenni Stadium were treated to a knock-down, drag-out, physical, nail-biting, and epic defensive football game. It’s too bad one team had to go home with a loss.

Unfortunately for the Blue & White, the Jays came up on the short end of the 10-7 final score.

Defensively, the Jays played one of their best games, stuffing time and again the Raiders’ potent offense. And strangely, the Jays’ offense – which averaged 42 points in their first seven games this season – struggled, especially in the second half. It was the second loss of the season for Jesuit (6-2).

The Jays play Brother Martin next Saturday at Tad Gormley Stadium with kickoff at 1 p.m. (Jesuit will be on the Roosevelt Mall visitor’s side of the stadium.)

Rummel’s lone touchdown came with about two minutes remaining in the first quarter on a short pass in which the receiver spun around on cornerback Justin Helm’s attempted tackle and raced 30 yards down the sideline into the end zone.

With five minutes left in the second quarter, the Jays answered with an almost identical play. Quarterback Trey LaForge threw a quick pass to wide receiver Kalija Lipscomb who easily shed his defender and sprinted 15 yards untouched into the end zone.

The Jays had an opportunity to put additional points up before the half ended when a drive that started around midfield fizzled when the Raiders intercepted a LaForge pass that was intended for Lipscomb in the end zone. There was a miscommunication on that play as Lipscomb’s route was not where LaForge threw the ball.

The second half saw the Raiders kick a field goal in the third quarter, the only points the Jays allowed. While Jesuit’s defense came up with some big plays, including a fumble recovery by Mark Beebe, Jesuit’s offense was stymied. LaForge threw two more passes that were picked off by the Raiders. The Jesuit quarterback, looking at a wide open Lipscomb, was hit right when he released the ball, which resulted in the third interception.

For the Jays, the game was winnable down to the last second. When was the last time the Jays threw up a “Hail Mary” with three seconds left on the clock? It was a jump ball in the end zone with six Raiders against Moreau and Lipscomb. Try as the Jays did, the ball was swatted away. Game over.

“We made too many mistakes,” Coach Mark Songy told reporters after the game. “When you make mistakes against a team of this caliber, you’re going to pay. I thought we could score some more points, but we just missed on a couple of plays. I’m proud of the team because they fought to the end. Got to get over this one fast because we have another one next week when we play Brother Martin.”

Nola.com: Justin Mourain field goal the difference in Rummel’s 10-7 defensive slugfest of a victory against Jesuit