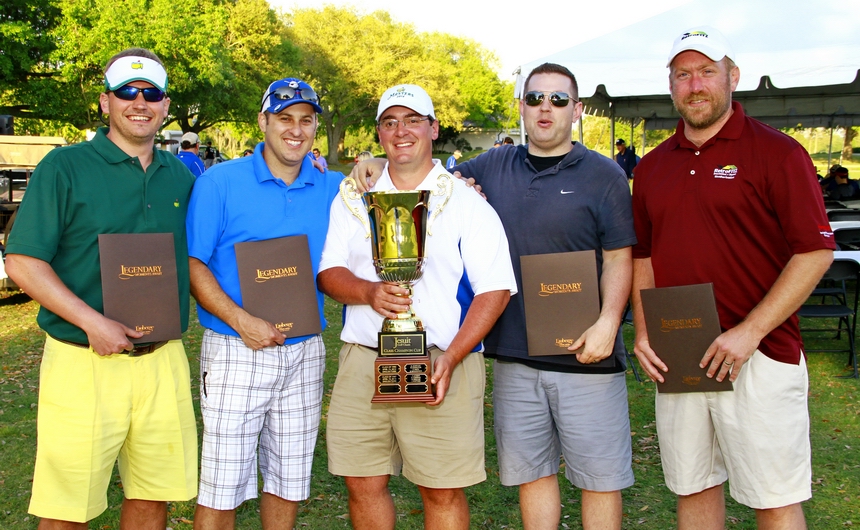 Jesuit Golf Classic chairman J.P. Escudier ’95 (center) has the pleasure of presenting the Alumni Champions Cup to a foursome of his own classmates, from left, Mark Hughes, Ron Britsch, Michael Malinowski, and Ryan Fitzmorris. The foursome shot a 59 to win the 3rd Champions Cup.

Check Back for the Big Photo Gallery

Golfers of all stripes – primarily blue and white and starring alumni, parents, and friends – took over the beautiful sun-drenched course at English Turn Golf & Country on Friday, April 11 for the annual Jesuit Golf Classic.

More than 200 golfers participated in this relaxing and fun-filled event, far more than last year when the tournament coincided with a vicious line of thunderstorms that inundated English Turn and made Noah’s ark the preferred means of transportation.

Not so this year on the par 72 championship course, which played in excellent condition from every aspect, from tee to fairway to sand traps to greens. In other words, a perfect day for a wild scramble tourney! 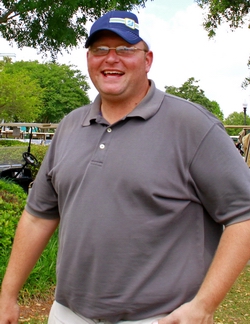 Sean Hardy ’02 was closest to the pin in the morning round.

The morning flight featured just under 100 golfers while the afternoon round attracted 120 Blue Jay duffers.

The 2014 Champion’s Cup was won in the afternoon round, with a score of 59, by one of the foursomes from the Class of 1995: Mark Hughes, Ron Britsch, Michael Malinowski, and Ryan Fitzmorris. Their winning score was two strokes lower than the Class of 1999’s morning foursome of Douglas Plaeger, Ryan Chin, Danny Poolson, and Toby Thevenot. 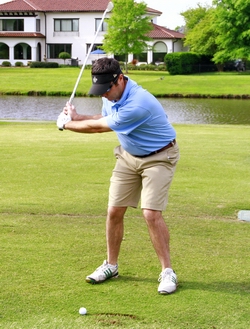 Mike Pizzitola ’02 had the longest drive in the morning round.

Since the Cup was inaugurated in 2012, the winners have been from three different classes: 1992 in year one, 1987 last year, and the Class of 1995 from the most recent Classic. The names of the players in the winning foursome are inscribed for posterity on a chit that is attached to the front of the Cup, which is then displayed throughout the year in the third floor hallway outside St. Ignatius Hall.

As decent a score as 59 is for the Class of ’95 champs, it is five strokes off the furious pace set by a morning foursome of alumni, though from different classes: Mike Pizzitola ’02, Ryan Peters ’06, Phillip Kelly ’04, and Sean Hardy ’02. This group shot 54, 18 strokes below par, which happens when the quartet were members of Jesuit’s golf team when they were students.. Two of the Blue Jays in the foursome won the “Closest to the Pin” and “Longest Drive” contests. Hardy was closest to the pin on hole #8 and Pizzitola crushed his drive some 325 yards on hole #5. David Blouin was closest to the pin in the afternoon round.

In the morning round, a score of 61 was good enough for second place and went to Thomas Bartlett ’89, his brother George Bartlett ’72, Gary McDonald (a friend), and Svend Janseri ’72. Third place, with a score of 66, was awarded to Brian North ’83, his brother Michael North ’82, Tim Sicard ’82, and Robin Hanemann ’79.

The afternoon foursome of Claude Cutitto ’60, Chris Cutitto ’83, Steven Riley ’80, and Ed Gardere (a friend) shot 58, one stroke better than the Class of ’95 champions, and good for first place. Turning in a score of 65, good for second place, was Patrick Donnelly ’89, Seamus O’Donnell ’89, Brian Kirn ’88, and Walter Maestri ’89. Third place, with a score of 68, went to Robby McMyne ’95, who was joined by three friends: Brian McSpadden, Bobby Killian, and Johnny Gallagher.

In the afternoon round of contests, David Blouin (a friend of Jesuit) was “Closest to the Pin,” while Richard Lo ’89 whacked the longest drive. 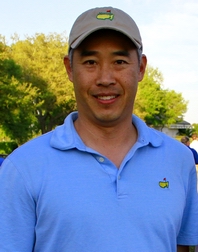 Richard Lo ’89 had the longest drive in the afternoon round.

This year’s tournament was chaired by J.P. Escudier ’95, who said all of the feedback from players was overwhelmingly positive. “A lot of hard work went into organizing this year’s Classic,” said Escudier. “Thankfully the weather cooperated and everything went great.”

In driving home a slew of thanks, Escudier mentioned  the following people and businesses: