Jays Have a Devilish Good Time Knocking Out the Saints 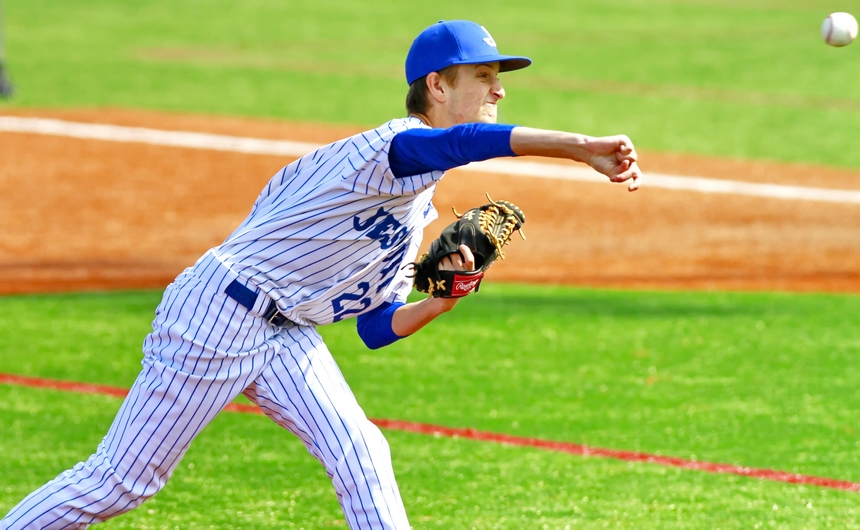 Christian Latino fires a rocket from the mound on Friday afternoon, March 7 at John Ryan Stadium.

Behind consistent spot-on pitching from Christian Latino and two relievers, and the hot bats of Andy Galy, Spencer Miller, and Trent Forshag, the Blue Jays had some fun at their own tournament, the 3rd Annual Jesuit Invitational.

Playing the West Feliciana Saints, the Jays scored runs in four of six innings and shut down the Saints after the second inning. When it was all over Friday afternoon at John Ryan Stadium, the Jays turned back the Saints, 8-3.

Christian Latino chalked up his first win of the season by tossing four innings, giving up three hits and striking out four batters. He was relieved by Glynn Hyer for two innings and Myles Blunt pitched to the final three Saints batters. Andy Galy and Trent Forshag each had one hit, but more importantly, they each had two sacrifice flies that scored a total of five runs. Spencer Miller had two singles. The Blue Jays spotted the West Feliciana Saints two runs in the top of the first, but answered with two runs of their own in the bottom of the inning.

Brandon Sequeira is scheduled to start on the mound against Byrd.

On Saturday, March 8, Jesuit plays its third and final game of the tournament against Mandeville High School. First pitch for that game is 5:30 p.m. at John Ryan Stadium.

Admission is $5 for adults, $3 for children. Student IDs are not accepted for the tournament.