At the Annual Open House, Hundreds of Prospective Blue Jays Are Given the Royal Blue & White Welcome 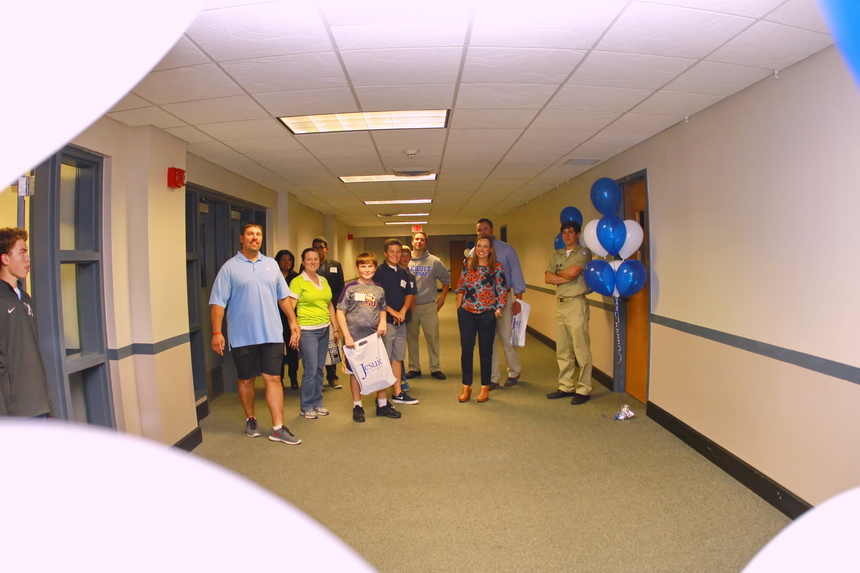 Seniors Billy McMahon (center, in sweatshirt) and Garret Perez (right) escort their Open House guests from the Student Commons and down the first floor hallway.

At Jesuit’s annual Open House on Wednesday, November 5, guests were given the royal Blue & White treatment.

Current students, numerous parents and alumni, and the 115 faculty members extended a genuinely warm welcome to some 450 prospective Blue Jays. Jesuit’s honored guests were accompanied by their parents and, in many cases, their siblings, other relatives, and even some close friends.

Parking was not a problem in the Mid-City neighborhood that surrounds Jesuit. Parents parked their cars on Will Clark Field, the open green space directly behind the school.

In addressing parents and their young prospective Blue Jays, Fr. McGinn took a few minutes to define and bust the three myths of Jesuit High School.

“The first myth relates to legacy, that you have to be the son of an alumnus to gain admission to Jesuit,” said Fr. McGinn, adding that only 20 percent of current Blue Jays claim a legacy of some sort, either via their fathers, grandfathers, or uncles. “Most of the student body, 80 percent, has no connection at all to Jesuit.”

“The second myth is that the prospective student must come from a wealthy family or he will be refused admittance,” said Fr. McGinn, explaining that Jesuit’s tuition (currently $8,250) is among the lowest of any private, Catholic high school in the metro area. “Our tuition is among the lowest because we seek a diverse student body. If we charged $10,000 or more, the demographics of Jesuit’s student body would reflect a much different high school.” 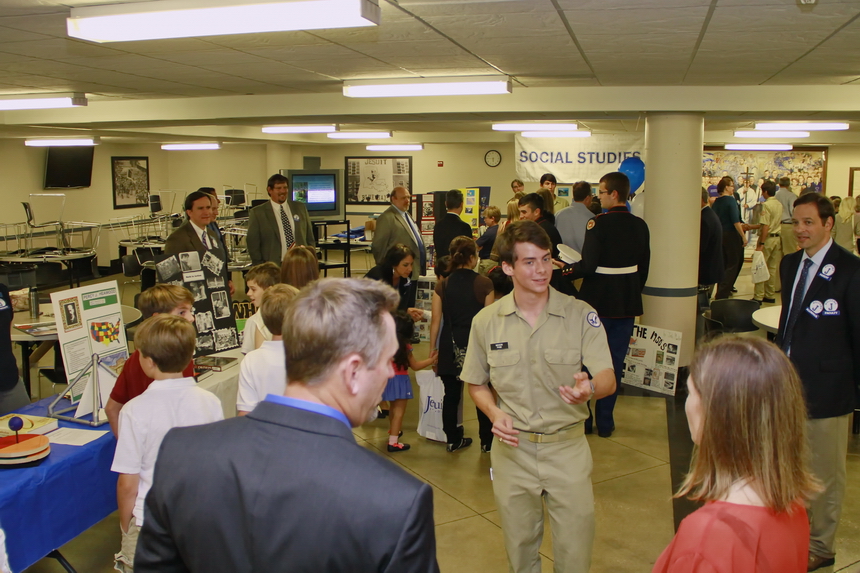 Senior Mason Page leads his guests past the Mathematics Department’s display and towards the world of Social Studies in the Student Commons during Open House.

Fr. McGinn also mentioned that numerous families struggle to pay tuition and the school has a generous assistance program based strictly on financial need. Last year, families received $650,000 in tuition assistance. This year, $750,000 has been set aside for tuition assistance, which is made possible by the generosity of the school’s many benefactors who contribute to Jesuit’s Endowment.

The third myth, Fr. McGinn told his audience, is that prospective students must be extremely smart and blessed with an abundance of athletic talent to gain admission.

“Nothing can be further from the truth,” he said and emphasized that Jesuit expects the best from each student, who can also expect the very best from Jesuit.

Finally, before filing out of the auditorium to embark on their tour of the school, guests sat riveted by the touching stories related by senior classmates Harrison Bond and Juan Martinez.

“I didn’t intend on being on the student council,” said Bond. “I envisioned myself as a basketball player at Jesuit. Unfortunately, a major crisis in my life cut that dream short:  at the end of my 8th grade year here, I was diagnosed with cancer. I had an aggressive, though very treatable, cancer which meant that treatment would be a whirlwind. I was called out of my Algebra I class on a Thursday morning, and by the next night I had had two major surgeries and had begun chemotherapy. One calming influence in my life was Jesuit. Some of my first visitors at the hospital were my guidance counselor, Mr. (Andrew) Schiro; our former principal, Mr. (Michael) Giambelluca (’82); and Jesuit’s president, Fr. McGinn.  They came to show me their love and support and to let me know that the whole Blue Jay community was praying for me.

“Of course, school was the last thing on my mind,” Bond continued. “But Jesuit was faced with a predicament: What were they going to do with a student who had to miss an entire quarter? They obviously couldn’t expect me to keep up with the full workload, but they also knew that they would be doing me a disservice not giving me any instruction. They came up with a plan: I would still be expected to learn the essential material of my subjects, but the school would be flexible in how that material would be taught. The teachers went out of their way to help me. I can still see Mr. (John) Lavie (’83), my Algebra teacher, coming to my house during the summer wearing gloves and a surgical mask to teach me an entire quarter of math in about three hours.

“But Jesuit didn’t just support me academically,” he added. “Mrs. (Pam) Catalano, my physical science teacher, organized all of my classmates to send me notes, all of which are still in my room to this day. Throughout my recovery, Mr. Schiro came to my house multiple times to check on me and discuss any problems I wanted to talk about. Fr. (Raymond) Fitzgerald (S.J. ’76) often visited and simply chatted with me in a gesture of love and support. I will always remember what Jesuit did for me: still expecting the best of me but at the same time showing so much support, flexibility, and compassion.

“In my work as president of the senior class,” concluded Bond, “I’ve learned that leading means serving, that true leaders use their God-given talents to enhance the lives of those they serve. In leading, I’ve made and deepened friendships with fellow Blue Jays. I’ve learned a ton about teamwork. I’ve been happy and I’ve had a fun and fulfilling year because I decided to do what I was meant to do. I’m trying to be a man who considers others and, by this, to live for the Greater Glory of God.”

“I share my day here with more than a thousand students,” said Martinez, who lives in eastern New Orleans and takes two buses to get to and from Jesuit each school day. “Jesuit is a big school. But I find Jesuit to be very comforting. We share the same uniform that Blue Jays have worn for the past eight decades. We share the rules and principles that have developed since the school was founded in 1847. We share the Blue Jay Spirit that has been passed on to us and that we now take care of. This makes me feel secure. When I walk down the hall and a classmate nods and says ‘hi,’ I get a feeling of unity and belonging. When a teacher spends time helping me with a tough concept, I feel cared for. It’s like being in a family where your parents push you to do your best and are always there to help you achieve that.”

Martinez attended Esperanza, located next door to the Jesuit gym on Carrollton Avenue.

“One day while heading to school, I asked my dad what school was that next to Esperanza and he told me that it was one of the city’s best schools, a school for very bright students.  After a moment or two, I told him, ‘Dad, one day I’m going to that school.’ My dad smiled and said, ‘Son, it would be an honor for our family if you went to that school. Your mother and I would be very proud of you. We will help you any way we can.’ That day everything changed for me. I would see the Jesuit students coming out the Carrollton and Banks exit and I would picture myself there. I worked hard in 6th and 7th grade and increased my grades from Ds and Cs to all As and one B. In 7th grade I felt better prepared and decided to apply for Jesuit.  I was so nervous during the test because I was finally going for what I had been working for all those years.

“Than one day I received the letter with the big news, the letter that would tell me if my work had paid off.  ‘Dear Friend,’ not ‘Dear Blue Jay’ as I had hoped. I had not been accepted. I felt bad, really bad. Then I decided that I had worked too hard to throw away all my efforts. So in 8th grade year I prepared even more, determined to make it into Jesuit. My effort resulted in straight As. I was ready for my last try. I applied again. I took the test and then just prayed that my hard work had paid off. The letter came. ‘Dear Blue Jay’!  I ran around like crazy half crying for joy that all my work had finally paid off. My dad hugged me and said ‘I knew you could do it.’ 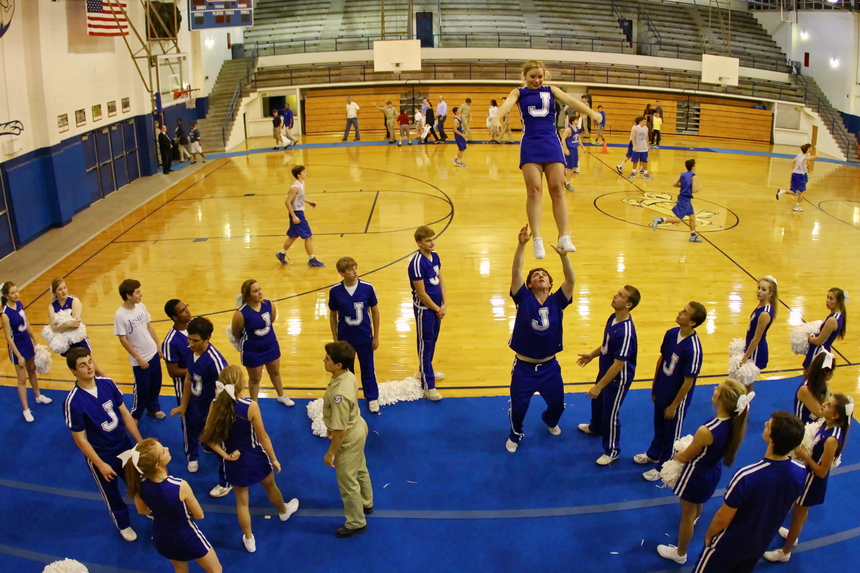 As tour guides led their guests through the gym (aka: the Birdcage), the Blue Jay basketball team had a full court scrimmage taking place while the Jesuit cheerleaders were busily refining their techniques. Senior Niko Ros is prepared to catch his “flyer,” Rebekah Besselman, a senior at St. Mary’s Dominican High School. 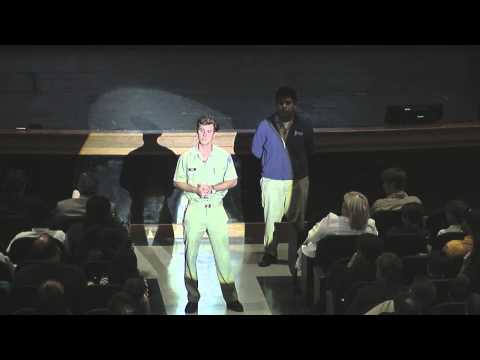