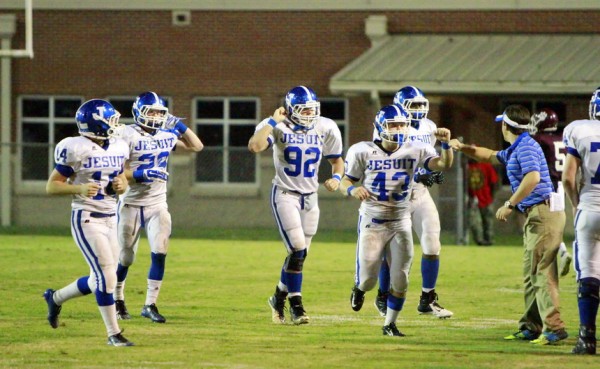 Jesuit’s defense will be counted on to not only limit the Warriors on the ground and in the air, but also to come up with big plays.

Large crowds are expected at Tad Gormley Stadium for Jesuit’s Homecoming game against East Jefferson on Friday evening, October 3. Kickoff is 7 p.m. Tickets will be sold at the Jesuit switchboard until 3:30 p.m.

The Jays have won three straight, sport a 3-1 record, and are ranked sixth in the state among Class 5A teams. Last week, Jesuit traveled to Pensacola where they whipped the Tigers, 49-17. East Jefferson, last year’s state champions in Class 4A but unranked this year, brings a 2-2 record to City Park. The Warriors are also coming off a win last week (against Cox, 30-27).

The Jays will be looking to atone for last year’s lopsided 21-0 shutout by the Warriors, who stayed unbeaten for the entire season.

Leading the Jays will be quarterback Trey LaForge, who has completed 60 of 93 passes for 790 yards and 12 touchdowns. One of LaForge’s favorite targets is junior wide receiver Kalija Lipscomb, who has scored seven touchdowns. Lipscomb has 26 receptions for 438 yards. LaForge’s other primary target, tight end Foster Moreau, has 14 receptions for 211 yards and five TDs.

Jesuit’s defense is led by linebacker Robert Lobrano, Mitchell Melito, and Jonathan Giardina, and defensive ends Osman Torres and Zack Robert, who plays alongside his brother Hunter (also a fullback in certain situations). Dillon Knight and Mark Beebe keep watch in the secondary.

Some of the Blue Jay fans at the game will be there, ostensibly, to watch the halftime presentation of Jesuit’s 2014 Homecoming Court, which is always a wonderful spectacle — for the participants themselves as well as for the crowd of onlookers.