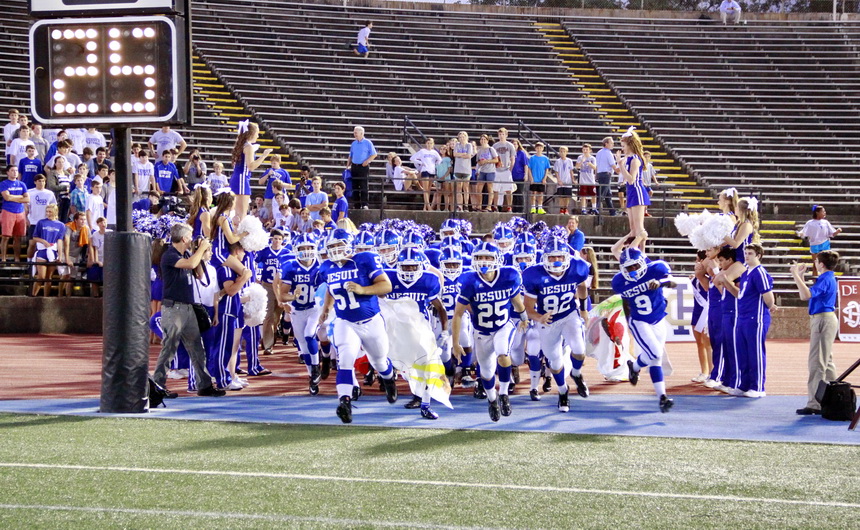 The Blue Jays are pumped and ready to play as they take the field.

View the Photo Gallery of the Jesuit – East Jefferson Game

It was a sweet Homecoming Friday night for the Jesuit Blue Jays and their fans.

The Jays unleashed an explosive offense against the East Jefferson Warriors, scoring six touchdowns before the Homecoming Court was even presented at halftime.

That’s all the scoring the Jays did as they routed the Warriors, 40-14, winning their fourth consecutive game and setting up the first of what should be several showdowns this season when Jesuit and Holy Cross tangle next Friday, October 10 at Tad Gormley Stadium. Kick off for this Great American Rivalry is 7:15 p.m., preceded by a tailgate event at 5 p.m. on the Marconi side of the stadium. 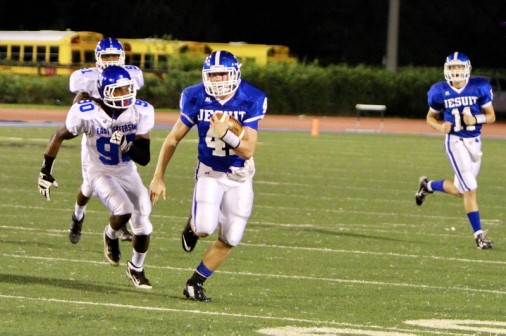 Michael McMahon picks up a first down in the opening minutes of the game. He scored two touchdowns.

Against East Jeff, the Jays enjoyed a rare easy go, one which may not present itself again for the rest of the season. The Warriors that the Jays played Friday are quite a different team from last year’s, which dealt Jesuit its only shutout of the season, 21-0 and went on to win the state championship in Class 4A.

That was then and this is now as Jesuit took the opening kickoff and marched down the field almost unimpeded. Fullback Michael McMahon scored the first of his two touchdowns when he rammed through the goal line on a 3-yard run. It was like like opening an offensive spigot. On the kickoff, the Jays’ defense held and Jesuit’s Chris Mills was soon scampering 26 yards into the end zone for the first of his two TDs.

On the ensuing kickoff, the Warriors fumbled and Jesuit’s Dillon Knight and Jandon Briscoe recovered. Seconds before the 1st quarter ended, Hunter Robert bulled his way across the goal from 1-yard out. Jesuit 19, East Jefferson 0. The Jays failed to convert after their first two TDs. Crew Jacobs’ kick after the first score went wide. After Mills scored, Jesuit went for two but the pass was incomplete. Jacobs’ kicked the PATs after the next four touchdowns.

While the first three TDs for the Jays were runs, the next three were Trey LaForge passes with the first going 7 yards to tight end Foster Moreau. McMahon hauled in a 40-yard pass and Mills a 30-yarder for their second scores. LaForge completed 13 of 19 passes for 212 yards (all in the first half). Mills tallied 76 yards on seven carries.

In the second half, head coach Mark Songy pretty much cleared the bench and gave the team’s sophomores and some juniors valuable playing time.