Jesuit to Play Rummel, Then Catholic High on Tuesday, Dec. 30 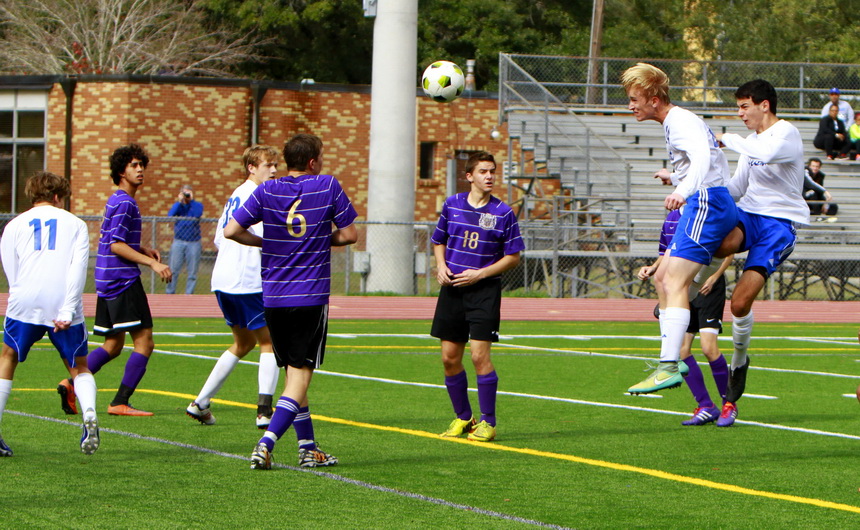 Junior Dillon Fuchs scores Jesuit’s second goal of the match on this header off a corner kick.

View the Photo Gallery of the Jesuit – Hahnville Match

Jesuit’s varsity soccer team won its two matches on Monday, the opening day of the 32nd Annual St. Paul’s Holiday Tournament, shutting out Hahnville, 5-0, then rallying in the second half to defeat Destrehan, 3-1.

The Jays play Rummel on Tuesday at 11:30 a.m., then Catholic at 2:30 p.m.. Both matches will be played at St. Paul’s stadium field. On Monday, Rummel beat Hahnville and lost to Catholic.

If the Jays take care of business in Bracket B against Rummel and Catholic, they will most likely play (yes, we’re hedging here because with the dynamic point system that’s being used, strange things could happen) in the championship game on Wednesday at noon against the winner of Bracket A, which looks to be St. Paul’s.

Junior striker Dillon Fuchs turned a hat trick in the Destrehan match, scoring all three of the Jays’ goals in the second half after the Wildcats took a 1-0 lead in the first minute of the game on a penalty kick. The Jays could not get going in the first half of the Destrehan game, but in the second 30-minute half, Fuchs lit a fuse and the fireworks exploded.

In their opening match of the tourney against Hanhnville, the Jays slammed the Tigers, scoring twice in the first half and adding three goals in the second half. Sophomore Hunt Navar scored twice in the second half. Senior Jack LaForge opened the scoring on a penalty kick. A few minutes later, Dillon Fuchs headed in a goal off a corner kick by Patrick LaCour. Senior Brett Lozowski scored the Jays’ fourth goal of the match in between Navar’s pair of goals.

Senior Otto Candies was in the goal for both matches. With the two wins on Monday, the Jays record is 8-0-1. In the latest soccer coaches’ poll, Jesuit is ranked third among Division 1 teams, with St. Paul’s and Acadiana holding down the one and two spots, respectively.