The Eagles Have Landed, Squarely on the Blue Jays 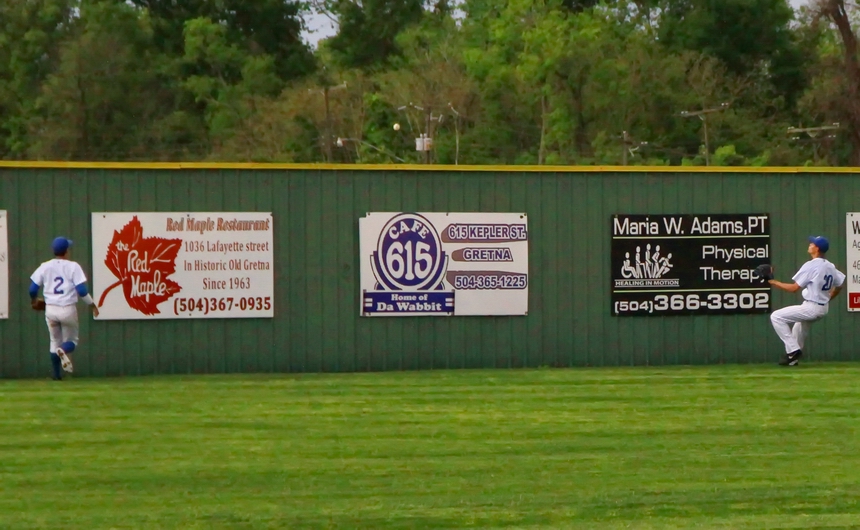 Left-fielder Brandon Bruiglio (2) and center-fielder Nick Ray can only watch as this ball clears the fence for an Archbishop Shaw home run. In a game Tuesday, April 8 on the Eagles’ field, the Blue Jays were handed their first district loss of the season, 7-2.

The Blue Jays were dealt their first district loss of the season on Tuesday, April 8 by Archbishop Shaw, 7-2. The loss creates a tie for first place between Jesuit and Brother Martin as the first round of district play ended.

The Eagles took full advantage of playing on their home field. Threatening weather moved the start of the 4 p.m. game back to 4:30, and eventually to 4:55. When the first pitch crossed the plate, the Blue Jays were already out of their comfort zone, their pre-game warm-up routine busted, their nerves frayed by sitting around the Eagles’ gymnasium waiting for thunderstorms to move through the area.

All of which made for a bad day on the diamond for the Jays.

Down 1-0 after the second inning, the Jays scored two runs in the top of the fourth to take a 2-1 lead, which held up until the bottom of the fifth. The Eagles pushed two runs across home plate to regain the lead, 3-2.

Then the sky fell for the Jays in the bottom of the sixth inning. The Eagles scored one run on a shallow fly ball that center-fielder Nick Ray could not reach in time. With two outs and a pair of Eagles on second and third bases, an Eagle whacked a home run over the left-center field wall to take a 7-2 lead.

The Jays’ Edmund singled with one out in the top of the seventh, stole second base, but that’s as far as he and his teammates could go. The next two Jays flied out and grounded out.

Jesuit (20-4 overall; 4-1 in district) plays Holy Cross on Thursday, April 10, a game which opens round two of district play. The Jays and Tigers will play at UNO’s Privateer Park with first pitch at 6 p.m.

“We need to put Shaw behind us, focus on Holy Cross, and go from there,” Coach Joey Latino told his players on the Eagles’ field after the game. “We’re 4-1 in district and tied with Brother Martin which isn’t bad. We just need to concentrate on controlling our own destiny.”