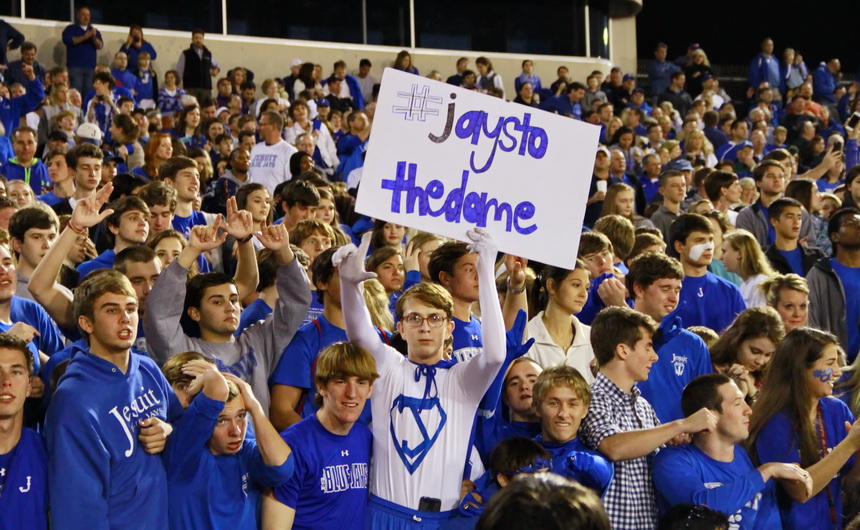 Looking Around in Jesuit’s Football Archives: It’s Been a Long, Long Time

For a school that possesses a rich athletic history steeped in prep’s gold standards of tradition, class, and sportsmanship, Jesuit will undoubtedly archive the 2014 varsity football season — no matter the outcome — on the shelf reserved for those truly momentous achievements in sports. 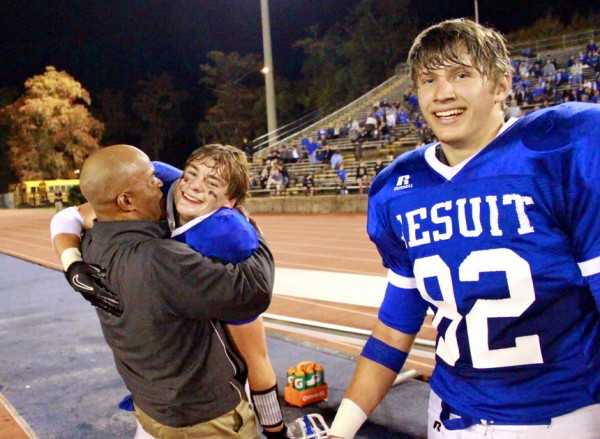 Jesuit’s convincing 28-14 win over Archbishop Rummel (ranked 12 nationally coming into the game) in Saturday night’s semifinal at Tad Gormley Stadium is a substantial accomplishment, and sweet in several ways.

The Blue Jays snapped the Raiders’ string of 17 consecutive wins and derailed their undefeated season. The Raiders are finished at 11-1. The Jays are 11-2 and not yet finished.

Finally! Jesuit’s last semifinal appearance was back in 1998, a 21-14 loss to Mandeville.

And, finally again! After a drought of 36 years — going all the way back to the 1978 season — the Blue Jays have a shot at a coveted LHSAA championship.

Let’s pause for a moment to dispense with a few bits of formality. The Jays are headed to the Mercedes-Benz Superdome on Friday, December 5 to take on the Patriots of John Curtis Christian High School in a Division 1 state championship football game. Kickoff for this marquee game will be approximately 8:30 p.m. and depends on the timely finish of three championship contests that precede the Jays and Patriots showdown: Division IV at 10 a.m.; Division III at 1:30 p.m.; and Division II at 5 p.m. Ticket prices start at around $10 per person. Additional information regarding admission will be posted on the Jesuit website as soon as possible. 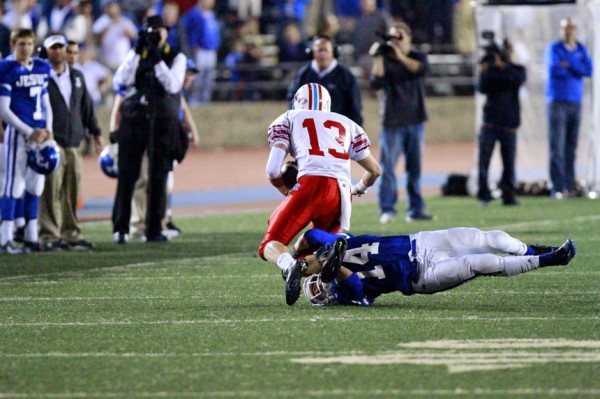 Cornerback Justin Helm goes horizontal to take down this Raider.

Jesuit’s Saturday night thrashing of Rummel unfolded before each school’s loyal and partisan fan base, an estimated 12,000 prep football supporters who had no trouble peacefully coexisting with each other for two hours in the old City Park Stadium. There’s something to be said about that.

The Raiders did experience one small victory: as the visiting team, they chose tails for the coin toss at midfield. And tails it ’twas, prompting the Raiders to elect to defer.

The Jays took the opening kickoff and proceeded with a drive that drained seven minutes off the clock but eventually stalled in Rummel’s red zone. Jesuit reached the Raiders’ 10 -yard line when the drive stalled on a penalty. A 37-yard field goal attempt by junior kicker and punter Crew Jacobs sailed wide and the Jays came away empty.

The Raiders also mounted a drive on their first possession but the Jays’ defense snuffed and stuffed it. Jesuit’s defense consistently swarmed the Raider ball carriers, not just stopping them and curtailing their yardage, but effectively disrupting their prescribed routes and blocking assignments. Playing mind games by stirring up scintillas of doubt. In other words, the Jays jilted the Raiders’ rhythm.

“Our defense has come to play all year and tonight our offense played real well,” said head football Coach Mark Songy. “We were explosive when we needed to be. If I could have written a script for it, I couldn’t have written it any better.” 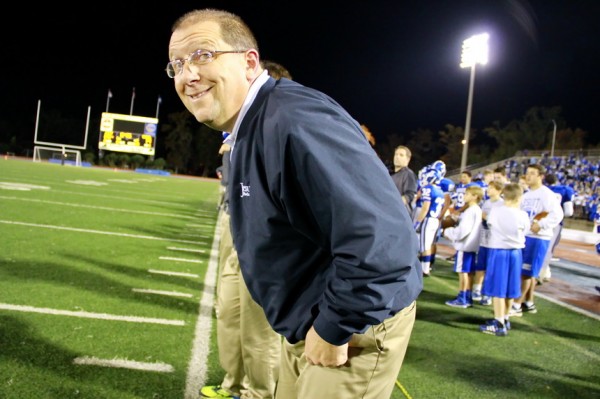 With seconds left on the clock, Coach Mark Songy can relax ever so slightly.

Blue Jay fans, from parents to alumni, sensed something good, something special about this game when it was still in the early stages. Perhaps it was a resolve, or an extra measure of confidence that had more than a few Blue Jay supporters believing this game would be completely different. It would be nothing like Jesuit’s regular season encounter with its rival a few weeks earlier at Joe Yenni Stadium when Rummel escaped with a 10-7 win. At the time, it was the Jays’ second defeat to go with the 24-21 loss to Ponchatoula in the season opener.

Against Rummel the second time around, the Jays remained laser-focused, taking full command of the game from start to finish, and executing almost flawlessly on both offense and defense. Coach Songy buys into that assessment.

“Our guys have a lot of character and guts, and played their behinds off against a great football team,” he said, pausing to survey the field where the Jays were enjoying their huge win. “We’ve always believed in ourselves. It’s just taking a little while for it to sink in right now. Part of the reason is that we treat every ball game the same in our approach to it. This game was treated the same. But the outcome is not. It means a lot.”

Four TDs from four Jays — seniors Chuck Jackson, Alex Rabalais, and Chris Mills, and junior Malachi Hull. Junior Crew Jacobs was perfect kicking all four extra points. The Jays’ second possession featured a 27-yard scamper by Mills, who was stopped two yards shy of the goal line. Jackson finished it off, crossing the goal line while surrounded by a wall of impenetrable beefy linemen who made the senior running back appear to be invisible.

Senior fullback Alex Rabalais caught a screen pass and outran the Raider defenders from 22 yards out. The Jays held a 14-0 lead until the Raiders managed to score 45 seconds before halftime, cutting it to 14-7.

All that did was strengthen the Blue Jays’ resolve in the second half. Four minutes into the third quarter, with the Jays on their own 44-yard line and facing third and four, Jesuit televised pass. Instead quarterback Trey LaForge handed the ball to Mills, who did the rest.

It was one of Mills’s finest runs of the season, a 56-yard scoot and scuttle. He picked his way through a host of Raiders and raced up the Rummel sideline. With one defender in the way at the 20-yard line, Mills abruptly shifted gears and cut back towards midfield, crossing the goal line a couple of seconds later. Jesuit’s lead increased to 21-7, and the Blue & White Marconi Drive-side of the stadium went nuts, as visions of Jays playing under the Dome lights began flirting in sight.

Meanwhile, the sound of silence was deafening on the Raider side of the stadium.

Four minutes into the fourth quarter, the Jays are driving again, reaching the Raider 18-yard line. LaForge throws to Mills in the end zone, but a Raider gets a hand on the ball, deflecting it away from its intended receiver and… into the arms of wide receiver Malachi Hull, whose route also took him into the end zone. Touchdown Jays, and they opened a three TD lead, 28-7. Rummel scored once more to close the gap, but 28-14 held up as the final score.

Coach Songy said that LaForge had a great game. The senior attempted 21 passes and completed 17 for 224 yards. Two of Jesuit’s TDs were passes. In the first game, LaForge’s protection broke down and he was picked off thrice by the Raiders. This time, the Raiders’ defensive line was consistently thwarted by Jesuit’s offensive line, granting LaForge generous amounts of time to find an open receiver. He threw zero interceptions in this game.

Going into the championship game, LaForge has attempted 292 passes, and completed 178 for 2,449 yards. He has thrown 27 touchdown passes and nine interceptions.

In the semifinal Saturday, LaForge’s targets included Malcolm Ben (5 catches for 45 yards), Mills (4 catches for 66 yards), and Hull (3 catches for 54 yards, including the deflected 18-yard TD). Rabalais caught one pass and turned it into a TD while LaForge’s most frequent target this season, Kalija Lipscomb, caught a single pass for 11 yards.| 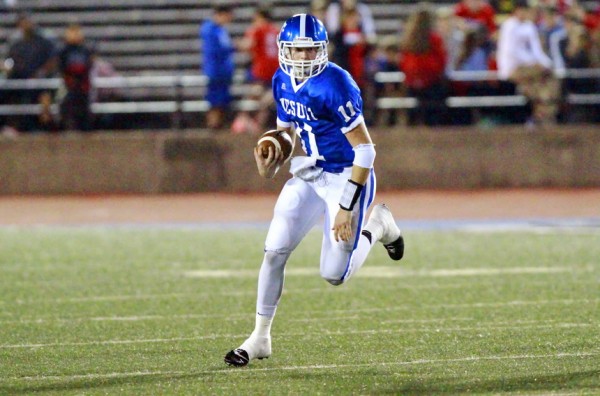 Quarterback Trey LaForge had a great game against the Raiders. He attempted 21 passes and completed 17 for 224 yards and 2 touchdowns. And he doesn’t hesitate to take off running if the opportunity presents itself.

“Trey made everything click tonight,” said Coach Songy. “He was on the money on a lot of his throws. He got great protection from our offensive line which is something we worked on. Rummel beat us up last time with a lot of their blitzes so we had to make sure that we put it all together, make sure we kept it clean, and we did. Our offensive line deserves a lot of credit.”

Jesuit’s rushing attack seemed to push around the Raiders at crucial times. The Jays had 159 yards rushing, and with the passing attack, racked up 383 yards in total offense versus Rummel’s total output of 234 yards (169 yards passing, 65 yards on the ground). The Jays had 19 first downs while the Raiders had 16.

Assistant coach Troy Baglio, who oversees the defensive unit, is compiling and updating individual player stats while reviewing the film of the Rummel game.

“It was a struggle and a fight-and-a-half the whole time,” said Coach Songy, adding he was not surprised by the intensity levels of the Jays’ hard work and their efforts. And he certainly wasn’t shocked at the results that yielded a two-touchdown victory over a previously undefeated and nationally ranked team.

“We picked the right time to play as well as we could and I think the guys knew everything that was at stake,” he concluded. “We could not let up at all because if we did, Rummel would stick it right to us. I can’t say enough about our guys.”

When a reporter asked Coach Songy about his thoughts on playing Curtis for the championship this Friday, he replied he hadn’t given it any thought at all. 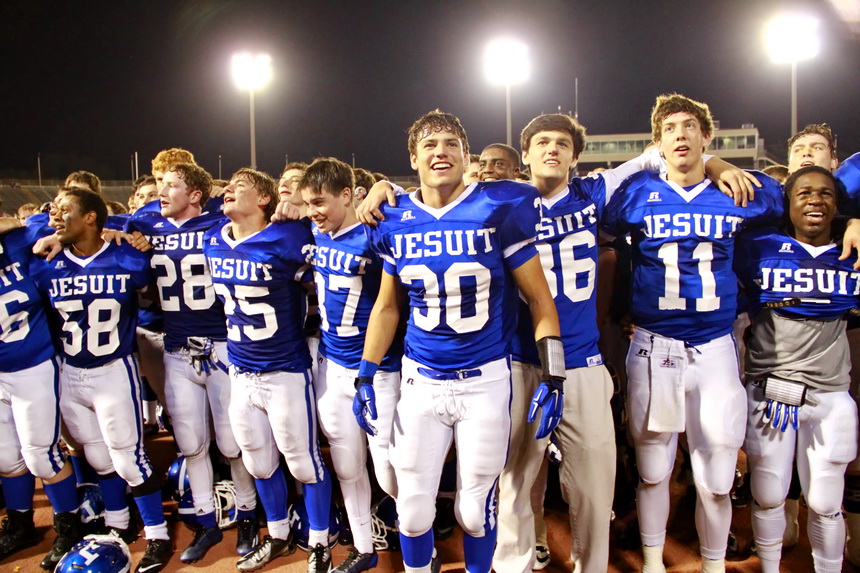 The players face the crowd of fans and together they sing the Alma Mater.