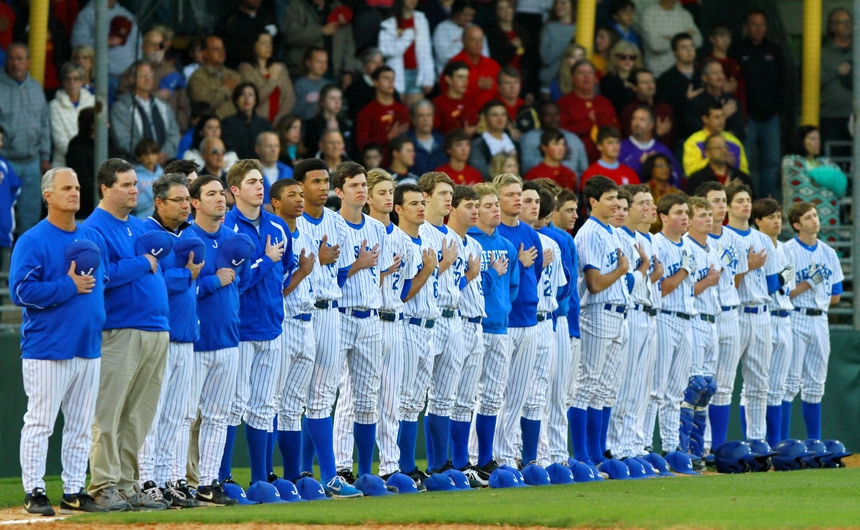 For the second time in two weeks, the Blue Jays stumbled. The Crusaders squeezed by their rival, 4-3, in a district game played Wednesday, April 16 at Kirsch-Rooney Stadium.

Staring into the Face of Adversity Once Again, Blue Jays Never Gave Up

View the Photo Gallery of the Jesuit – Brother Martin Game

Jesuit took it on the chin against Brother Martin on Wednesday, April 16 as the Crusaders handed the Jays their second district loss of the season, 4-3.

The Blue Jays did not go down easy. Brother Martin jumped out to a 2-0 lead after two innings, but Jesuit put up a single run in the fifth only to watch the Crusaders add two runs in the fifth inning to take a 4-1 lead. In the sixth inning, Jesuit scored two runs to make it a close game, 4-3, but the Crusaders stymied the Jays in the final inning.

Senior C.J. Avrard took the loss, his first of the season. His record is 6-1. Avrard pitched 4 1/3 innings, giving up five hits and four runs. He struck out three Crusaders while giving free passes to first base to a handful of batters. Avrard was relieved by senior Glynn Hyer, who gave up only one hit, no runs, and struck out three batters.

The Jays’ hot bats against Holy Cross and St. Louis Catholic cooled considerably as they could muster only three singles from Alex Galy, Dan Edmund, and Brandon Sequeira.

“I am extremely proud of the way you guys hung in there until the very end,” Coach Joey Latino told his team after the game. ” We’re not done yet. There’s plenty of baseball left.”

The Jesuit – Brother Martin game was taped and will be broadcast on WHNO-TV (Channel 20) on Thursday, April 17 at 8 p.m.