Blue Jays and Crusaders Blowin’ in the Wind 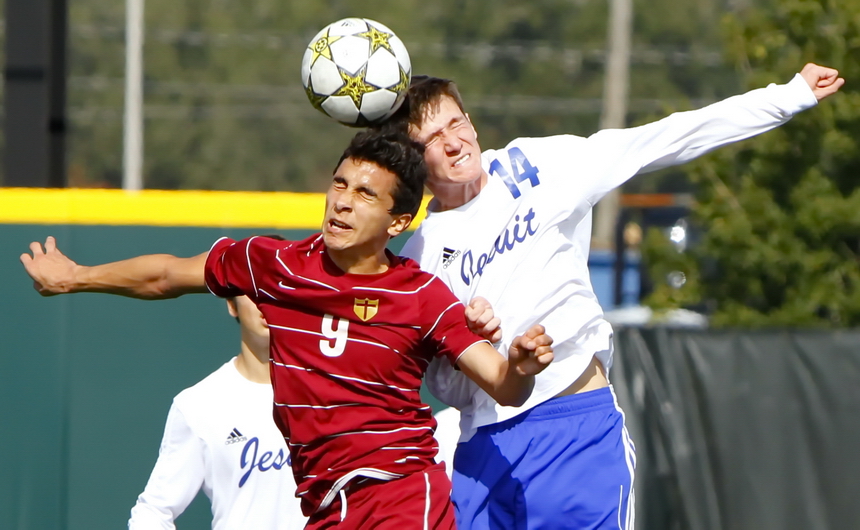 Jesuit senior Will McQueen goes up head-to-head against this Crusader in a Saturday soccer match at John Ryan Stadium that proved to be a tough physical battle for both teams.

Funny how the ball bounces on the soccer field. And that’s without being influenced by wind. When the wind kicks up at John Ryan Stadium, as it did in a soccer match played against Brother Martin on Saturday, Jan. 11, the physics factor becomes a huge dynamic game changer. Sometimes, Mother Nature helps Jesuit, and sometimes not.

Against the third-ranked Crusaders, the Blue Jays (ranked two notches below at fifth) experienced a cruel wind. How cruel? Two to one cruel. For the Jays, it was not so amusing the way the ball bounced the Crusaders’ way — twice — right into the Jesuit goal. But fans of Blue Jay soccer can’t blame the wind exclusively for their team’s 2-1 loss.

The Crusaders showed Jesuit many different doors. The Jays could not find a way to open them. Jesuit scored first, and as it turned out, a lone goal that came in the 12th minute of the match when senior mid-fielder Evan Kramer lofted a free kick over the heads of four Brother Martin defenders, landing the ball perfectly in the upper left corner of the Crusaders’ net. It was as perfect a kick as any could be. The Crusader goalie never had a chance.

The match between the two teams was a typical tough, physical game that fans have come to expect. The eight yellow cards were about evenly distributed between the two rivals, and were six, maybe seven more than what was necessary, but all refs are different.

The next home game for the Blue Jays is Tuesday, Jan. 14 when Gulfport High School comes to John Ryan Stadium for a match that kicks off at 7 p.m.