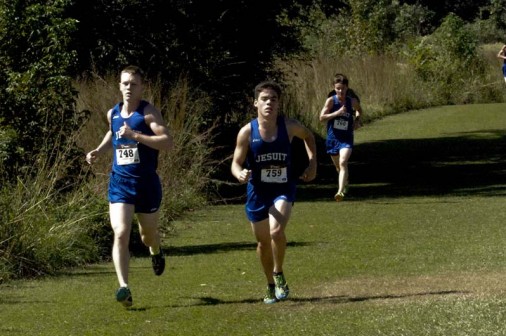 Seniors Patrick LaCour (left) and Matthews Vargas sprint to the tape at the Watson Ford Invitational on Saturday. Lacour took first place overall in the 5-K race with a time of 16:48, just two seconds ahead of Vargas. In the background is junior Carlos Zervigon, who finished third overall (photo courtesy Beth Vargas).

In high school cross country, the best possible team score in a meet is 15 points, the result of placing your top five runners in the top five spots. Adding the places of your runners–one plus two plus three plus four plus five–yields a perfect 15, the cross country equivalent of bowling a 300 or running the table in pool . At the Mississippi College Watson Ford Invitational in Clinton, Mississippi, on Saturday morning, Jesuit took the team title with 16 points.

As always, Coach Rudy Horvath’s ’86 squad relied on the power of the pack. Last week in Pensacola, the time differential between the Jays’ top five runners was 11 seconds, a split admiringly described by Nola.com cross country beat writer Johanna Gretschel as “sick.” Well, it was every bit as sick this week as a mere 12 seconds separated Jesuit’s top five runners. Breaking away from the pack to win the meet’s open division race was senior Patrick LaCour, who shattered his personal record by posting a time of 16:48 for the 5-K course. Right on his heels were senior Matthews Vargas (2nd overall), junior Carlos Zervigon (3rd overall), senior Michael Schwing (4th overall) and sophomore Eli Sisung (6th overall).

“Patrick ran a phenomenal race,” said Horvath. “But all of the guys ran really well. We’ve had a couple of really grueling weeks of practice, and I thought some of the guys might struggle with tired legs today. But they came out strong.”

The Jays’ closest competitors were both Louisiana schools. Fontainebleau finished second with 77 points, followed by St. Paul’s with 124.

Such a convincing win over St. Paul’s, considered by many to be one of the favorites in 5A this year, would normally be cause for celebration. Unfortunately, all the news on the day wasn’t good.

For the first time this year, the meet added a “Gold” Division with an early morning start. “There was no way we could get to Clinton early enough for that start,” said Horvath. “We had already done an overnight trip the previous week, and I wasn’t going to get my guys on the road at 4 a.m.”

St. Paul’s didn’t have such constraints. Their top runners, therefore, competed in the gold division, including two runners who had never laced up a pair of sneakers in a competitive meet for the Wolves. As impressive as the Jays’ times were in the open division, they wouldn’t have been enough in the Gold, where St. Paul’s easily bested the rest of the field.

“I’m certainly not going to let that rain on today’s parade,” said Horvath. “But we definitely need to kick it up a notch to compete with those times at state.”