Continuing Life in Ministry, Being with His Blue Jays, are President’s Chief Goals 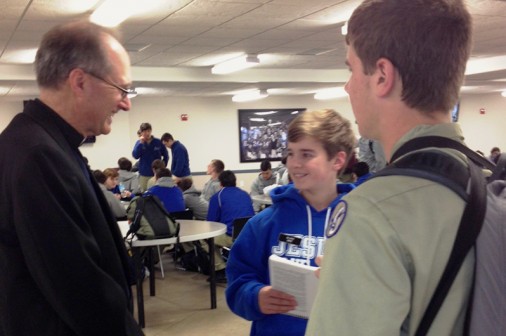 Fr. Raymond Fitzgerald, S.J. enjoys one of his favorite activities, spending time chatting with students in the Commons. He can often be found there before school, during lunch, or in the afternoons after the bell has rung. Photo by senior Jack Caliva.

Following the announcement of his medical diagnosis, Father Raymond Fitzgerald, S.J., has continued in one of what he has considered the greatest joys of being president – spending time with his Blue Jays. In the Commons before school or at lunch, at meetings with his Odd Instruments Orchestra, or in the courtyard after school, he has made a particular effort to be with the students of Jesuit High School.

He sat down to chat with The Blue Jay, reflecting on the impact of his illness, but also on the many other aspects of life he continues to share with us all.

The recognition of his illness came about slowly.

“I started noticing some symptoms in mid-fall of 2012,” he said. A diminished strength in his grip and a twitching in his arms began making it difficult to give out Communion or hold a pen.

At an annual checkup, his doctor noted that there could be many causes for the twitching and weakness, and sent Father Fitzgerald to a neurologist.

“The neurologist ran some tests. They ruled out that it could be a tumor, which is good, and did another series of tests, and at the end of which he gave me his best diagnosis and suggested I get a second opinion on this,” he said. “But the other neurologist confirmed the diagnosis.”

Since that diagnosis in June, his doctors have stressed that the illness is never exactly the same. “The symptoms are not progressing with huge rapidity but they are moving in a certain direction,” Father Fitzgerald said. He is undergoing exercise and physical therapy to maintain muscle use as long as possible, and is taking medication that has shown success in slowing the rate of deterioration.

As he noted in his address to the student body, he remains open to discussing his condition but also to “not discussing it, as well.”

His commitment to Jesuit remains as strong as ever, he emphasized.

“First off, this is where I am assigned to be; that does figure into it,” he said. Jesuit also is where he wants to be, serving as a leader, a teacher, and as a priest.

“The ‘bucket list’ things aren’t really the way I think. For other people, that might be meaningful and I am happy for them,” Father Fitzgerald said. “When asked if there is a place that I really, really want to see, I’d have to say no. It’s nothing exotic.”

“If you asked what makes me happy, it would be the kinds of things I am able to do here and the kinds of people who are here – such as the C.S. Lewis class, the conversation one has in the Commons, or being a priest in this context, the ministry and life I’ve dealt most with my life,” he said. “That is one thing I desire to do.”

Exercising his priestly ministry, whether by celebrating the Eucharist, offering spiritual direction or just sharing in a conversation of faith, also remains among his greatest joys, he said.

As he said at the special assembly, another hot topic of conversation must be dining.

“As a New Orleanian, I enjoy eating, and luckily we have a few places that can accommodate that,” he said with a smile. “I am also blessed with the Jesuit community we have here and time to spend with my Jesuit brothers, living together in the same community I have certainly found a blessing during my assignment here.”

Sharing a passion for movies and reading, we asked for a list of books everyone should read.

“That’s almost a completely different conversation. It kind of depends on what people are interested in, and then we could go from there,” he said. “Well let’s see, though, I can do favorite authors. Honore de Balzac would be my all-time favorite author. P.G. Wodehouse, an English writer of comic novels and short stories; and Charles Dickens, I have always been a fan of him. Victor Hugo and Alexandre Dumas always have a way of getting you into a wonderful world.

“I’m a big fan of St. Augustine, anything he wrote or preached; and theologically I like the Patristic era, which is group of 5th and 6th century writers,” he said. For contemporary theology, he likes Anglican scripture scholar N.T. Wright, and German historical theologian, Martin Hengel, “who really has a magisterial study on the New Testament.” “And anything Cardinal Ratzinger/Pope Emeritus Benedict XVI wrote is great.

“For genres, it’s really eclectic; I like mysteries and historical novels.”

Before leaving the presidency at the end of the school year, Father Fitzgerald said he hopes to further some key accomplishments, including finishing out the years strongly.

“I want to move ahead on strategic planning, and look towards how the endowment might be enhanced to give us another income stream, so that the rise of tuition might be mitigated,” he said. “We are working on another master plan for the building as we get it ready for its upcoming 100th anniversary. All of these will occupy a lot of my time, but these would have happened anyway because this is what one does in a third year.”

Since becoming president in 2011, Father Fitzgerald also has been able to return to the classroom, co-teaching the popular class on the writings and theology of C.S. Lewis. The message of much of Lewis’ writings has gained particular resonance now.

“At certain points, when reading over for class, I would think, ‘That was well put, there.’ One of the great things about C.S. Lewis, in either one of his direct works like Mere Christianity or in a fiction work, is that what he is describing is applicable in any stage of his life.

“While some things may point to certain interests, like Eschatology (the study of the end of time), and I may have had that, but, on the other hand, speaking about wanting to live a heavenly life now is true all the time.”

“It was a great experience and one of the great things about literature like C.S. Lewis, an author that you should read every 10 years or so, is that different things will pop out to the reader. What was particularly great about that class was having a room full of people discussing a book that gets the energy going and gets to the power of literature and having an excess of meaning around.”

This summer’s pilgrimage to South America to World Youth Day with 35 Jesuit students and about a dozen other chaperones also took on special meaning for Father Fitzgerald, coming just after having received his diagnosis.

“World Youth Day and the pilgrimage before that was such a privileged and a particularly graced time, especially with the news I had received before,” he said. “You have to bring something to prayer on pilgrimage and this is as good a thing as any. And seeing the great example on that pilgrimage left me very consoled.”

Along with being in the presence of Pope Francis at Rio de Janeiro, of course, a number of smaller moments were especially moving, he said.

“What I was moved by the most was an evening Mass we had at Trinidad in Paraguay. Saying Mass in the sanctuary of one of our Jesuit Reductions is something that you just never think you would be able to do.”

Celebrating that Mass under the canopy of stars, or taking in wondrous natural sites, such as the famous Iguacu Falls, were natural highlights of the pilgrimage.

“But something that really meant a lot to me that wasn’t a big ticket item was just the cumulative effect of looking around the bus and it being a remarkably good group of people. This is really something. And the joy I found in that group and not thinking, ‘When is the spell going to break?’”

Father Fitzgerald said he saw on the pilgrimage an “open-endedness of grace.”

“There really is no limit to goodness except what we set for ourselves,” he said. “The dynamic of the group and the sort of ways that different individuals would impress me each day just grew every day.”

“It is like the great end to the C.S. Lewis novel, The Last Battle. It’s a story that never ends and each chapter is better than the one before.”