In Commemoration of Its 50th Reunion, Class of ’63 Donates Scholarship 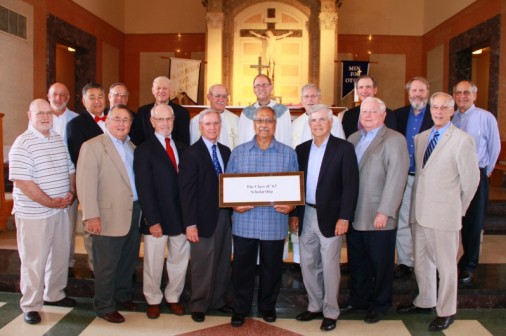 Fr. Raymond Fitzgerald, S.J. offers his thanks to a flock of Blue Jays from the Class of 1963 for their generosity in endowing a scholarship for their alma mater.

Fr. Raymond Fitzgerald, S.J. ’76 joined two of his fellow Jesuit priests on Sunday, June 22 at a Mass of appreciation for the Class of ’63, which has donated a scholarship to its alma mater. The class collected almost $60,000 in donations in less than a year to commemorate its 50th anniversary.

Joining Fr. Fitzgerald on the altar of the Chapel of the North American Martyrs was Fr. Fred Kammer, S.J. and Fr. Clyde LeBlanc, S.J., who are both members of the Class of ’63.

Scholarship donations ensure that no Blue Jay will ever be turned away from Carrollton and Banks because he can’t afford the full cost of tuition.

After Mass, the alumni and their spouses took a tour of the Hall of Honors, peeked into one of six classrooms that are being renovated during the summer of 2014, and attended a breakfast reception in St. Ignatius Hall.