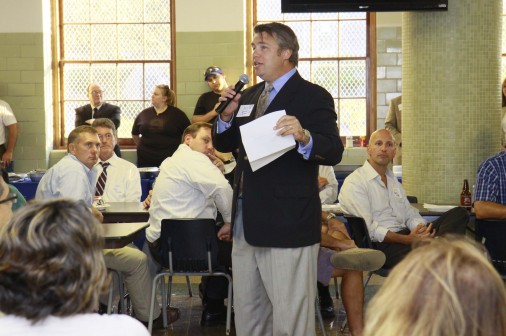 PAG chairman Gerald Duhon ’85 welcomes hundreds of parent captains on Wednesday, Aug. 13, and thanks them for serving as volunteers in the campaign that helps to keep Jesuit accessible. Before the dinner meeting in the cafeteria, parents attended Mass in the Chapel of the North American Martyrs.

The 2014-2015 Parents’ Annual Giving drive — the campaign that keeps Jesuit affordable and accessible to as many families as possible —  is off and running.

The official kick-off of the campaign took place on Wednesday, Aug. 13 with a Mass, dinner meeting, and social for members of the PAG leadership team, which consists of 15 grade-level tri-chairs and hundreds of parent captains. This year’s drive is being led by chairman Gerald Duhon, who is a senior parent and 1985 alumnus.

The evening started with Mass in the Chapel of the North American Martyrs, followed by brief  presentations by Duhon, Jesuit president Fr. Anthony McGinn, S.J. ’66, and Harrison Bond ’15, who is president of this year’s senior class.

Jesuit asks all of its families to do their best in making up the difference between tuition and the actual cost of educating a Blue Jay. For ten consecutive years, the drive has topped the $1 million mark.

The due date for pledges is Friday, September 5. Families have until May 31, 2015 to make their tax-deductible donations.