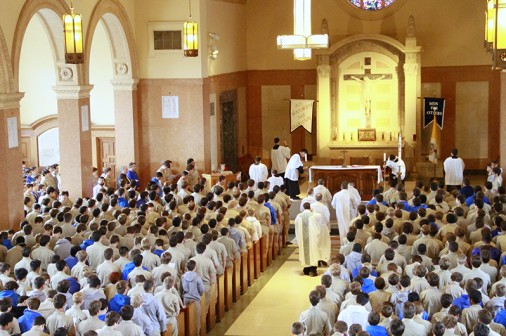 Students, faculty, and staff gathered in the Chapel of the North American Martyrs on the morning of Tuesday, May 13 for the final school community Mass of the 2013 – 2014 academic year.

Students, faculty, and staff gathered for Mass in the Chapel of the North American Martyrs to celebrate the Feast of Our Lady of Fatima on the morning of Tuesday, May 13. The feast day celebrates when the Blessed Mother appeared to three shepherd children at Fátima, Portugal from May 13 to October 13, 1917. The children were told by Mary, the Mother of God, to tell all of us to repent from sin, do penance, turn back to Jesus Christ.

During Mass, school chaplain Fr. Donald Saunders, S.J. presided over a special ceremony to commission several students who will serve as Student Extraordinary Ministers of Holy Communion for the 2014-2015 school year.

The Mass was also the final of the 2013-2014 academic year and gave the entire student body, along with faculty and staff, the opportunity to worship together and reflect on the close of another memorable year.