Blue Jays, Focused and Trusting In Each Other, Seek a State Championship in Sulphur 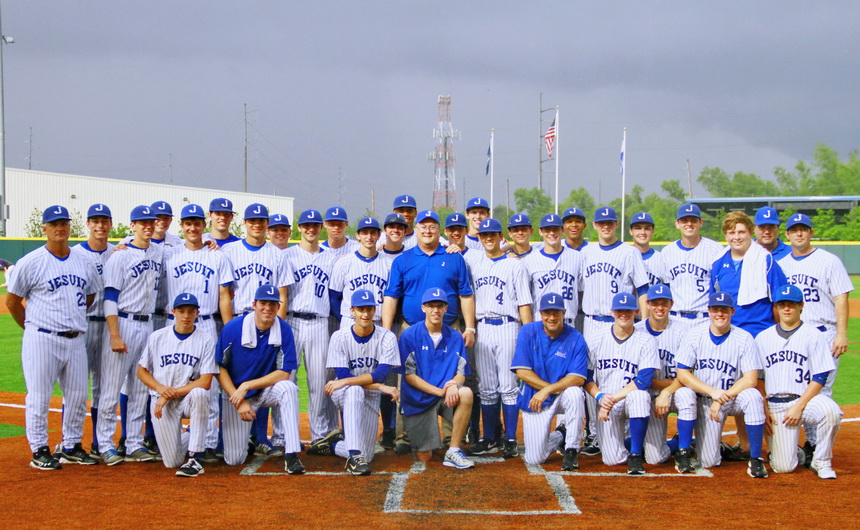 With a dark sky looming in the background, the 2014 Jesuit baseball team is joined by Blue Jay alumnus John Ryan ’70 for a photo at home plate. The Jays bring a 32-5 record to the LHSAA State Tournament where they will play the 10th-seeded Eagles of Live Oak in the semifinal game on Friday, May 16 at 4 p.m.

View the Photo Gallery of Game 1, Jesuit vs. Alexandria

View the Photo Gallery of Game 2, Jesuit vs. Alexandria

The Jesuit Blue Jays are bound for Sulphur on Friday morning, May 16, one of the final four Class 5A teams converging for the biggest showdown of the season at the LHSAA State Baseball Tournament. It will be the Jays’ first trip to the state tournament since 2011 when they beat Lafayette at Tulane’s Turchin Stadium to win their 20th championship.

Jesuit is seeded 3rd and brings a 32-5 record to the tournament. The Jays will play the 10th seeded Eagles of Live Oak in a Class 5A semifinal game. The first pitch is at 4 p.m. at McMurry Park’s field #41.

Games Will Be Broadcast & Streamed

Jesuit will broadcast the semifinal game on radio station WSLA (ESPN Radio – 1560 AM), which can be heard only in the New Orleans area. However, the broadcast will be streamed live on the radio station’s web site: http://www.wslaradio.com/

If Jesuit plays in the championship game Saturday at 5 p.m., that game will be broadcast on WGSO 990 AM as well as streamed live on the radio station’s web site: http://wgso.com/

Jesuit’s broadcasting team will be Jude Young ’95, who will call the play-by-play, and Billy Babin ’74, who will offer analysis and commentary. First NBC Bank is sponsoring the Jesuit broadcasts.

The National Federation of High Schools Network will also be in Sulphur streaming the playoffs as pay-per-view events. The Class 5A championship game will not be among their offerings. However, the two Class 5A semifinals will be broadcast on a pay-per-view basis.  More information is here.

WVUE-TV FOX Sports New Orleans is taping the 5A Championship game but the earliest date it will air is Saturday, May 24 at 9:30 p.m. Additional air dates can be viewed on the LHSAA web site.

The winner of the Jesuit – Live Oak game plays for all the marbles in Saturday’s championship game against whichever team emerges victorious in the Barbe – St. Amant semifinal game, scheduled for Friday at 7 p.m. The Bucs of Barbe hold the #1 seed and the Gators of St. Amant are seeded 5th.

“This is an unbelievable opportunity and I cannot be any happier for you guys,” head Coach Joey Latino told his team following their two-game sweep of 6th seeded Alexandria last week (May 9-10) at John Ryan Stadium. “What you have done is a tribute to your character. Let’s not be satisfied. Let’s go to Sulphur ready and focused. I wouldn’t expect anything less. Let’s give it our best shot.”

The Jays have practiced hard all week and the team’s senior pitching aces – C.J. Avrard and Brandon Sequeira – are well rested. Between the two right-handers, they’ve won 19 games this season with Sequeira winning 10, one more than Avrard. Each pitcher has a single loss on their record.

The Jays vs. the Trojans

Against the Trojans of Alexandria, Coach Latino sent Sequeira to the mound in the opening game, which was interrupted by torrential downpours three times. The umpires ultimately postponed the game in the bottom of the fifth inning because of the bad weather. The following day, the game picked up where it left off – the score was tied, 3-3, the Jays were batting and had one out, Harrison Daste was on 3rd base, and designated hitter Stephen Sigle had a 1-2 count on him. The first pitch was a ball to even the count. The second pitch was all Sigle’s. He hit a blooper to left field that easily scored Daste from 3rd. The Jays’ 4-3 lead held up for two more innings.

Coach Latino called on Avrard for the second game against Alexandria. Easily the biggest player on the team, Avrard encountered some turbulence in the early innings, but worked through it. The first two innings were scoreless and then the Jays erupted for three runs in the top of the 3rd, two more in the 4th, and the final three runs in the 5th. The 8-0 win was Avrard’s fourth shutout of the season.

The Blue Jay bats came alive in that second game and the Trojan pitchers were tagged for 11 hits, including an inside-the-park home run by senior Blake Baker, who belted one in deep center field (scoring Sequeira who had just hit a stand-up double and would later hit a single). An errant throw from the Trojan centerfielder didn’t hurt Baker as he rounded 3rd and headed home on a full sprint, sliding the final six feet, and momentarily sitting on his haunches with a sheepish grin on his face. His teammates went bananas.

Wielding hot bats against Alexandria last Saturday were Alex Galy, who went 4-for-4, including a double, and had 2 RBIs. Stephen Sigle, the hero of Game 1, had 2 RBIs and showed the Trojans the real definition of a designated hitter by smacking a double and a single.

If Jesuit advances to the championship game on Saturday (5 p.m.), the Student Council is planning to support the team by mobilizing a “Spirit Bus” full of Blue Jays. The bus will leave at 11 a.m. Saturday from the Traditions Courtyard and return around midnight. Students will need a permission form to board the bus. The forms can be obtained from the Council’s office in Room 113, but must be completed and turned in by the end of lunch on Friday. Act quickly because seats on the bus are limited. Students will need to buy a $10 admission ticket at the game and have enough money to cover dinner on the return trip.