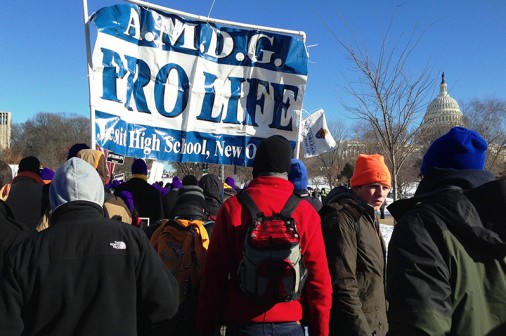 Blue and white banners were raised high in Washington, D.C., last month as members of the Jesuit Pro-Life Club joined hundreds of
thousands of others in the 41st annual March forLife. More than 50 members of the Jesuit community, including students, faculty and
alumni, weathered the single-digit cold to speak out against abortion on the anniversary of the Supreme Court’s ruling in Roe v. Wade. Staff photo by Jack Caliva

A little ice and sleet might shut down roads and bridges here at home, but even an arctic blizzard couldn’t deter a flock of Blue Jays – along with approximately 400,000 others – from marching to protest abortion in our nation’s capital.

The Pro-Life Club returned to Washington, D.C., last month for the 41st annual March for Life. The march commemorates the Supreme Court’s 1973 decision of Roe v Wade, which legalized abortion in the United States. The number of abortions that have occurred since that decision is estimated at more than 57 million in the United States alone.

Our group of 54, which included students, faculty members and alumni, arrived in a frigid Washington on Jan. 18. We first traveled to the United States Holocaust Memorial Museum. There we witnessed firsthand the atrocities committed throughout Europe by the Nazis against Jews and other targeted groups. Many were moved during this experience and saw the underlining connections between the Holocaust and the modern horrors brought about through abortion.

Louisiana has been called the most pro-life state in the union. In D.C., that was evident. We participated in Geaux Forth, an event sponsored by the Louisiana Right to Life for the many young people from the Bayou State gathered for the march. Various speakers told of ways the next generation of leaders can take an active part in the pro-life movement.

On Tuesday morning, we joined our colleagues from Jesuit Tampa to hear from noted commentator and writer George Weigel and other members of the Ethics and Public Policy Center. Weigel is best known for his comprehensive biography of the soon-to-be canonized Pope John Paul II. The EPPC is a group of scholars in Washington who discuss and write about the country through the lens of the Judeo-Christian tradition. The members of EPPC discussed the abortions laws being passed across the country and the effect’s of the president’s health care plan from both the state and national level.

That night, we attended the Mass for the Unborn at the National Basilica of the Immaculate Conception on the campus of the Catholic University of America. The Mass was concelebrated by Cardinal Donald Wuerl, the archbishop of Washington, D.C., and Cardinal Sean O’Malley, OFM Cap., the archbishop of Boston. In his stirring homily, Cardinal O’Malley compared the selling of abortion to the fairy tale of the Emperor’s New Clothes. Under the guise of the “right to choose,” abortion advocates are selling something that does not exist and making all of us the fools.

Other highlights of the trip included seeing all the snow – a rare sight for most of the students – as well as time spent on the National Mall and at the various museums of the Smithsonian Institution. We also visited the sacred grounds of Arlington National Cemetery, and took a nighttime tour of the various national monuments.

Over the course of the weekend, the weather slowly worsened. At first, we encountered merely cold temperatures in the mid- to upper-30s. But an arctic blast drove the mercury down to single digits. By the morning of the March for Life, the thermometer read 7 degrees.

But this inclement weather did not deter anyone’s spirits. With an estimated 400,000 others on Wednesday morning, we trekked from the National Mall to the steps of the U.S. Supreme Court. And the snow that had fallen overnight only made the Mall look that much better.

Directly following the march, our group returned to the hotel to collect luggage and head to the airport for the night flight home. Despite the weather delays plaguing much of the country, we were blessed to arrive home safely and on time at 10 p.m. Wednesday, ready to come back to school to tell about this moving experience.