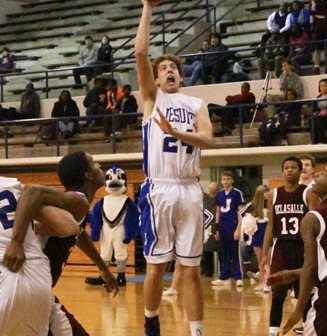 After cruising to a 66-36 win over Lake Area at home in the Birdcage just three days before, the Blue Jays had to dig deep to come out on top in a 57-53 road contest against South Terrebonne High School on Monday, Jan. 13 at Spectator Gym in Bourg, La.

Despite leading at the end of the first quarter, it started out shaky for the Blue Jays as they found themselves trying to stop a 7-0 Gator run late in the first half. The Blue Jays remained cold offensively, and entered the locker room trailing 25-16.

A second half spark pushed the Jays to a fleeting lead. But the Gators roared back late in the third quarter. Another lead change in the fourth quarter proved to be the last as the Blue Jays scored 41 second half points and held on for the win, improving to 12-6.

The Blue Jays return to action on Friday, Jan. 17 when they open district play and take on cross-town rival Archbishop Rummel in the Birdcage. Tipoff for that contest is slated for 7 p.m.