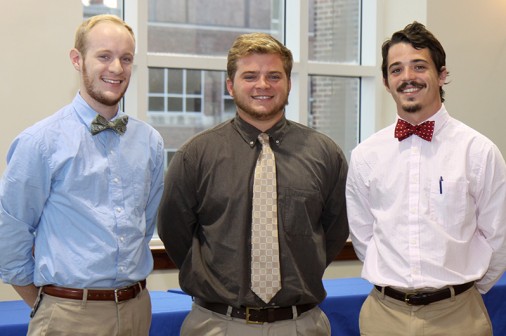 Charles Bourg, Matt Firmin, and Tim Harris of the Class of 2010 make up this year’s crop of Alumni Service Corps members.

Three members of the Class of 2010 — Charles Bourg, Matt Firmin, and Tim Harris — recently began their year of service to Jesuit as part of the Alumni Service Corps (ASC).

The ASC is a volunteer opportunity available to Jesuit graduates to devote a year of their lives in service and thanksgiving for their Jesuit education. It is a unique opportunity for participants to give back to their alma mater during a year between college and a career or graduate school. In addition to teaching, each ASC member will tutor students, assist with co-curricular activities and events, participate in retreats and service days, and work in various sectors of the school.

Charles Bourg ’10 teaches World Geography. He moderates the Social Justice Forum and is involved with the Philelectic Society. Bourg earned a bachelor’s degree in sociology from Loyola University New Orleans. While at Loyola, Bourg served on the executive board of the University Programming Board and the Loyola University Community Action Program. Bourg also served as an Ignacio Volunteer in Kingston, Jamaica, working with various community service organizations.

Matthew Firmin ’10 teaches Earth Science. He is involved with the Student Council, intramural sports, and wrestling. Firmin returns to his alma mater with a bachelor’s degree in biology from LSU. In the summer following his freshman year at LSU, Firmin served as a youth counselor for the Jesuit World Youth Day Pilgrimage in Madrid. He also volunteers at Krewe de Camp, a summer camp for children with cerebral palsy and Down Syndrome.

Timothy Harris ’10 teaches Christianity. He is involved with the wrestling team and the Ultimate Frisbee Club. Harris earned a bachelor’s degree in philosophy from LSU. While at LSU, Harris was involved with the school’s Catholic Center, Christ the King. He converted to Catholicism during his freshman year.

ASC Director Michael Prados ’83 serves as a guide and mentor for the alumni participants. Prior to directing the ASC, Prados was the director of student activities for 10 years. He has led the Appalachia service trip and was director of service projects for five years. His deep understanding of the Jesuit mission of service was strengthened when he worked with the Jesuit International Volunteers after graduating college. Through that service, he spent three years in the Marshall Islands teaching in mission schools.

While the ASC is only in its second year at Jesuit, similar alumni service programs have been in existence for many years at other Jesuit high schools around the country. These programs are founded on the four components of service, community, simplicity, and spirituality. Both the schools and the participants have benefited greatly from this rewarding relationship.