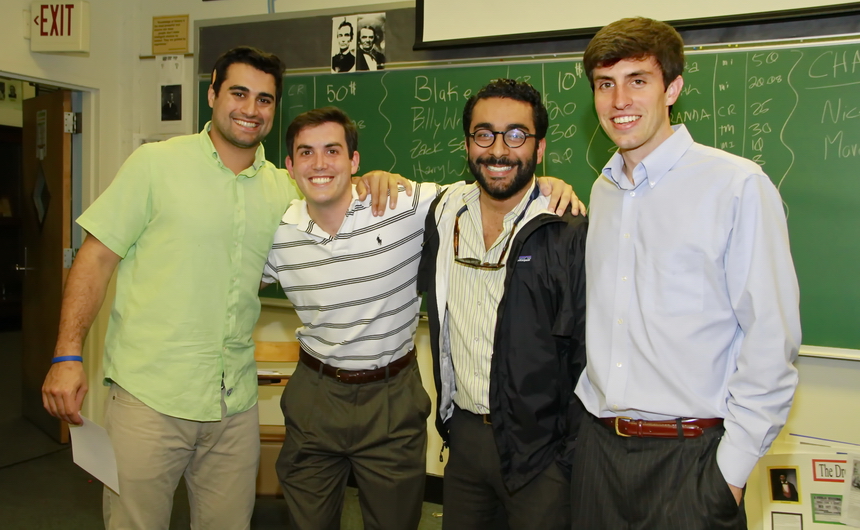 This quartet of newbie LEF volunteers from the Class of ’08 sought the silence offered in Mr. Ron Rossi’s history classroom to re-connect with classmates while taking care of business. From left, Troy Mathews, Craig Raymond, Mathew Irimpen, and Graham Williams transform Mr. Rossi’s history cave into their central command post where they busily worked cell phones while tracking the numerous pledges of classmates on the chalkboard.

The calls went out and Blue Jays responded. The 2014 LEF Spring campaign concluded a three-night run at Jesuit High School and the results are impressive.

As the drive wound down Thursday evening, LEF chairman Snapper Garrison ’81 was euphoric and almost at a loss for words, a rare situation for any lawyer to find himself in. In two seconds, Garrison found the right words: “I am extremely honored to be part of this tradition that brings many alumni to Jesuit twice a year, three nights in the fall and then again in spring,” said Garrison to a group of stalwart alums who celebrated with him on the roof of the small chapel overlooking the Traditions Courtyard and beyond Jesuit’s campus, the twinkling lights of the Mid-City neighborhood. “Over the course of these six amazing nights, I watched as more than 300 Blue Jays displayed their devotion to their alma mater while connecting with classmates. It’s incredible to witness the friendship among the volunteers from the various classes who are calling as well as the camaraderie between the alums and their classmates who are on the other end of the phone.”

Garrison thanked Fr. Raymond Fitzgerald, S.J. president of Jesuit High School, for asking him to chair the 2014 drive as well as the staff of the Institutional Advancement office that provided support and assistance throughout the intensive fall and spring phone events. He also thanked 2013 chairman Glenn Gillen ’85 for his invaluable advice during the year. Garrison will eventually pass the baton to Michael Varisco ’83, who has also answered the call by agreeing to be the next LEF chairman for the 2015 campaign.