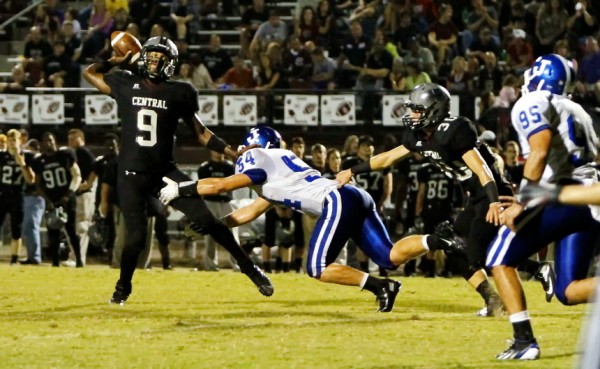 Linebacker Colby Simoneaux bursts through the offensive line to put some hurry-up heat on the Wildcats’ quarterback.

Jesuit and Central High played a long show for their fans in Baton Rouge on Friday evening at Wildcat Stadium. When the clock ran out three hours later, the Jays notched their second win of the young season by holding off the Wildcats, 17-14.

Scoring for the Jays were junior running back Chris Mills, who grabbed a short pass from junior quarterback Trey LaForge. With the extra point by sophomore kicker Crew Jacobs, the Jays and Wildcats were tied at 7-7. Seconds before the first half ended, the Wildcats took a 14-7 lead when their quarterback heaved a bomb to a receiver who had beaten the Jesuit secondary. However, it was all the scoring that Central High would achieve as the Jays rallied in the second half for a 25-yard field goal by Jacobs that cut the lead to 14-10.

With three minutes remaining, the Jays drove down the field and junior running back Malcolm Ben scored on a two-yard run. With the PAT by Jacobs, Jesuit nursed a precarious 17-14 lead. On the ensuing kickoff, the Wildcats returned the ball to midfield and quickly went to work. A few plays later, the Wildcats fumbled on Jesuit’s 20-yard line and senior Jesuit linebacker Colby Simoneaux pounced on the ball to end the threat.

The Blue Jays return to action on Friday, September 27 when Pensacola travels to New Orleans for a 7 p.m. game at Tad Gormley Stadium.