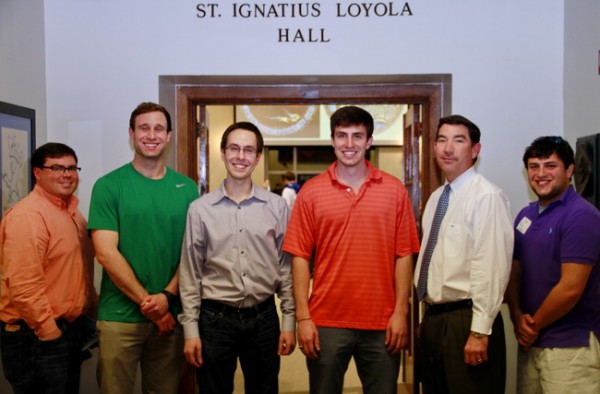 LEF rookies like these Blue Jays helped push the spring phone drive past $100,000. The newbie callers gathered outside St. Ignatius Hall where they were part of a group of 46 alumni who volunteered to contact classmates to encourage them to participate in the drive. From left are: Aubrey Spreen ’99, Mike Boyd ’06, Jeff Serpas ’00, Graham Williams ’08, Jimmy Holmes ’83, and James Linn ’06.

Jesuit Asks Its Alumni Once a Year to Give Back to the School… and Blue Jays Respond Generously, Surpassing $1,000,000 in Pledges to the 2012-13 LEF Drive

The 2012-13 LEF spring phone drive enjoyed a successful three-night stand that included surges during the final evening, Thursday, March 14 in the number of Blue Jay alumni pledging and amounts pledged. The final results are posted below and reflect only the phone drive held this week in Syt. Ignatius Hall. The results do not include the fantastic news that — for the first time — alumni pledges to the LEF campaign surpassed the $1 million mark before the start of the spring drive.

If you missed your classmates phone calls, give them a break because it’s never to late to Donate to LEF.