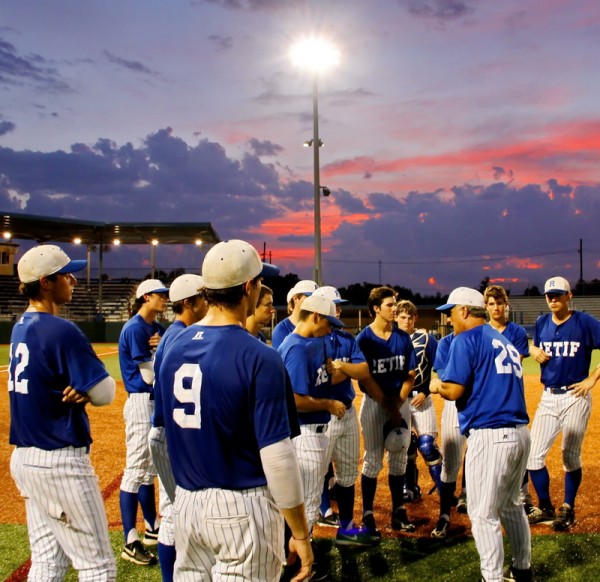 Coach Latino congratulates his players for winning all three games they played in the tournament. After a couple of days off, the team will resume practice with the goal of winning the City Series. Retif takes a 19-5 record into the City Series and will play Ponstein’s Grocery on Friday, July 5 at 7:15 p.m. at Kirsch-Rooney Stadium.

When the tournament is yours, it’s nice for the home team to win all three games played. That’s what Retif Oil did this weekend at its Invitational Tournament at John Ryan Stadium, sweeping three opponents and in the process scoring a total of 18 runs. Retif’s third game of the tournament was played Saturday evening, June 29, against Refuel, with the boys in blue coming out on top, 6-1. Retif’s Brett Leonhard ’13 pitched six innings, allowing just one hit and striking out eight batters, to improve his record to 4-2. Steven Sigle ’14 wielded Retif’s hottest bat, going three for three, including a double that scored two runs.

Retif Oil now focuses on playing in the American Legion’s City Series, which gets underway Friday, July 5. Retif’s first opponent will be Ponstein’s Grocery (Holy Cross) at 7:15 p.m. at Kirsch-Rooney Stadium. The City Series, which also features Peake BMW (Brother Martin) and Post 307 (DeLaSalle), is a double elimination tournament in which all games are nine innings.