Family, friends, alumni, and former players are invited to attend the funeral service for Ray Coates on Monday, July 8 at Jesuit High School’s Chapel of the North American Martyrs. Visitation will be from 9 a.m. – noon. A Mass at noon will be con-celebrated by Jesuit Fathers Raymond Fitzgerald ’76, Norman O’Neal, and Nick Schiro ’44, who was a classmate of Coates. 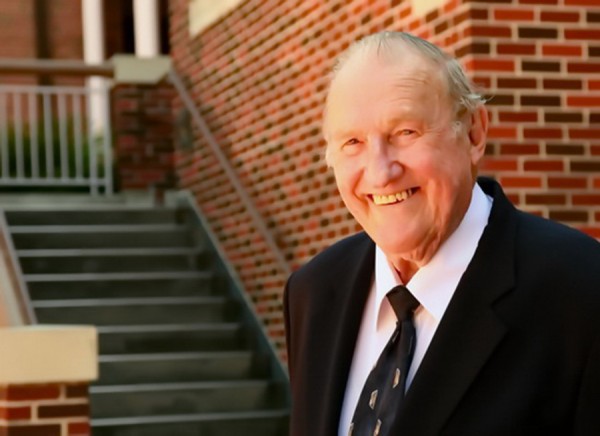 Ray Coates, a legendary prep athlete and a 1944 alumnus of Jesuit High School who later became a successful football coach at his alma mater, died on Wednesday, July 3. He was 89.

The cause was congestive heart failure, according to Mark Drewes ’78, who was Coates’s son-in-law.

Born on May 8, 1924, Rayford “Ray” Coates was a gifted athlete whose talent and leadership abilities in multiple sports at Jesuit gained him prominence during the years of World War II. In the 1943 season, Coates was a senior and the captain and star quarterback of the school’s football team. That year, his adroit athletic skills were instrumental in carrying the Blue Jays to an undefeated season and a state championship.

Coates still holds down the top two spots in Jesuit’s football record book for longest interception returns. In 1942 against St. Stanislaus, he returned a 98-yard interception for a touchdown. The following year against Baton Rouge High School, Coates intercepted a pass at the Jesuit goal line and returned it 100 yards for a touchdown. He also holds the top spot in Jesuit’s record book for the longest punt return, 93 yards against Fortier in 1943.

Additionally, Coates was an All-State member of the 1944 state championship basketball team. He ended his playing career at Jesuit as a four-sport letterman, at the time only the eighth Blue Jay to accomplish such a rare achievement.

In 1952, he joined the Society of Jesus as a Jesuit novice, but soon left to teach and coach at Catholic High School in Baton Rouge from 1953-1958.

Coates joined the faculty of Jesuit High School in 1959 as a mathematics teacher and coach. He initially served as an assistant to the colorful Ken Tarzetti., who despite his cantankerous nature, was a successful football coach.

Following Tarzetti’s death, Coates was handed the reins of Jesuit’s football program and served as head coach from 1966-1970. Like his predecessor, Coates also possessed a unique coaching style, a growling grumpiness of sorts that quickly dissolved whenever he flashed a disarming smile. During his five seasons as Jesuit’s head coach, Coates compiled a respectable 40-12 won-loss record and his teams made three appearances in the state playoffs.

Coates elected to retire in 1988 after a 35-year career in education. At the time, he had devoted almost 30 years to mentoring Blue Jays at Carrollton and Banks.

Coates and his wife, the former Miriam Huerstel, celebrated their 60th wedding anniversary on April 18, 2013. She died on May 9, 2013, the day after his 89th birthday.

Family, friends, alumni, and former players are invited to the funeral services, which will be held on Monday, July 8 at Jesuit High School’s Chapel of the North American Martyrs. Visitation will be from 9 a.m. – noon. A Mass at noon will be con-celebrated by Jesuit Fathers Raymond Fitzgerald ’76, Norman O’Neal, and Nick Schiro ’44, who was a classmate of Coates.