History and spirituality came together as a flock of Blue Jays headed to South America this summer to join millions of pilgrims for World Youth Day 2013 in Rio de Janeiro. 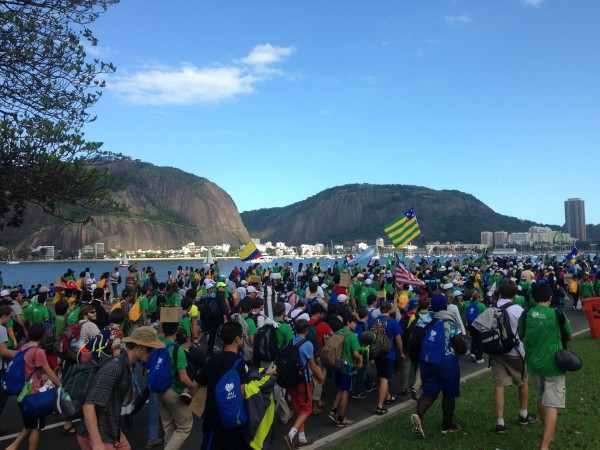 The Jesuit contingent at this summer’s World Youth Day in Rio de Janeiro head toward the famous Copacabana Beach, the centerpiece for the pilgrimage. The Blue Jays joined more than 3 million others for Mass with Pope Francis. Photo by Mr. Jeremy Reuther.

Pope Francis greeted the huge crowds at several events, including a Mass celebrated on the world-renowned beach at Copacabana. The fact that this was Francis’ first trip back to his home continent since being elected to the papacy, added to the excitement.

For the 35 Jesuit students and their dozen chaperones, the sense of history of the pilgrimage was enhanced by the opportunity to see the first Jesuit pope. That historical focus was a significant part of the pilgrimage as the Jesuit contingent also toured a number of historic sites across South America associated with the Society of Jesus.

The Blue Jay editor-in-chief, Jack Caliva, joined the trip and shared his reflections.

Our pilgrimage began on July 14, as the Jesuit group flew from New Orleans to Sao Paulo, Brazil. There we visited the Patio do Colegio, the spot where Jesuits Manuel da Nobrega and Jose de Anchieta built the first church, after founding the city of Sao Paulo as a mission in 1554.

From there, we flew to Foz do Iguacu in southwest Brazil, before crossing the border into Paraguay. Mr. Jeremy Reuther led that part of the trip, guiding our group through the Jesuit Reductions in the Paraguayan countryside. The mission-based settlements, established in the 17th and 18th centuries, were built to house and convert the indigenous people of region, while allowing them the autonomy of maintaining their culture in the midst of Spanish colonial rule.

On the second day in Paraguay, we hiked through a Guarani village and then through other dirt roads, finally ending at Trinidad. There we celebrated Mass under the canopy of the stars in the former church. Afterwards they had a light show and tour of the reduction, which included music from the period and finished with a slide show with various pictures of artifacts left from the reductions.

The following day, we traveled to Santa Maria de Fe, a Paraguayan town established around a former reduction, with a few original buildings still left. In the three days here, we were able to tour the museum, which included Guarani art from the reductions. We also bought crafts from a shop run by the local women in the village. Fun was had feeding the monkeys gathered in the Plaza in the center of town. 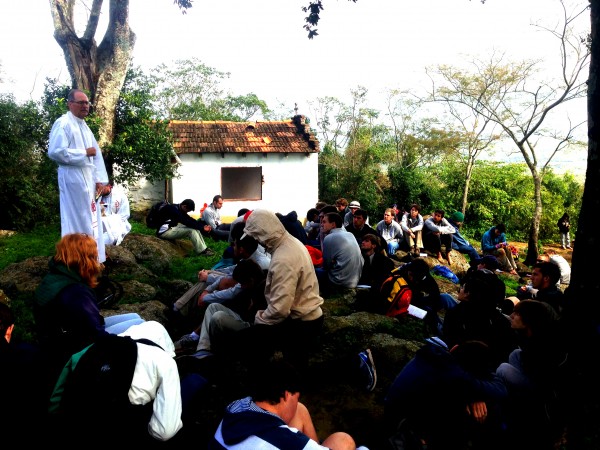 As our first week drew to a close, our group hiked a trail to celebrate Mass on the top of a mountain. On our way up the mountain, we prayed the Stations of the Cross, following the stone markers carved throughout the mountain path.

For nighttime entertainment, the pilgrims sang karaoke, including such hits as Michael Jackson’s “Man in the Mirror” and a rousing version (in which everyone joined in) of Billy Joel’s “Piano Man.” Our last night in Santa Maria de Fe featured a local band playing traditional polkas and other Paraguayan music.

We also were lucky enough to hear a trio of harpists who played not only music from the reductions but also the theme from “Titanic.” Following this, the students were able to display their own talents, which concluded in a rendition of “American Pie,” led by Mr. Joe Hill, S.J.

Our final morning in Santa Maria de Fe included a visit to the Garden of the Resurrection, which is a representation of the tomb and the Passion of Jesus. An ox-cart ride around the square took us to Mass with Father Charles Thibodeaux, S.J., a Jesuit originally from the New Orleans Province who has worked many years as a missionary in Paraguay. Money raised each year during our school’s annual mission drive helps support Father Thibodeaux’s work in the country.

Now en route to World Youth Day in Rio, the Blue Jay pilgrims traveled back to Foz do Iguacu for a spectacular site – the Iguacu Falls. Before his retirement, Mr. Charlie McGannon had told us to be prepared to be amazed. “They make Niagra Falls look like a leaky faucet,” he said. Was he right! The falls are some of biggest series of falls anywhere, and one of the greatest natural wonders of the world. 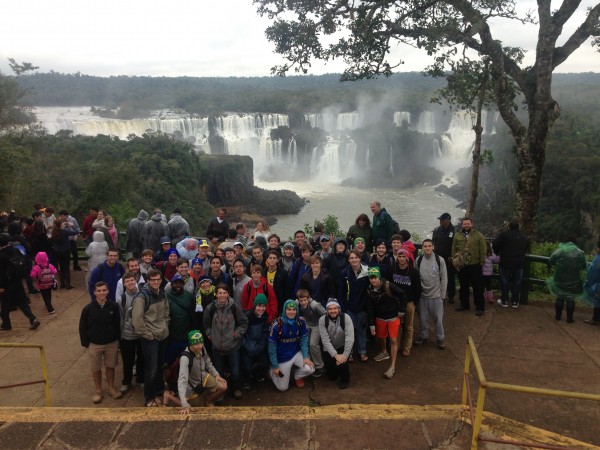 While in South America, the pilgrims toured several historic Jesuit sites, including the town of Foz do Iguacu, the site of the Iguacu Falls, one of nature’s most splendid marvels. Photo by Mr. Jeremy Reuther.

The climax of the trip, and reason for it, began the following Monday as we flew to Rio de Janeiro to gather with millions of other young Catholics from around the world.

The festival began Tuesday with an opening Mass on the Copacabana Beach, celebrated by Archbishop Orani Tempesta. In welcoming the pilgrims to Rio, he urged us all to spread the “infectious joy and peace of Christ” to the whole world.

“Walk through this city, witness to Jesus Christ, commit to the new world,” he said. For the next few days, we did just that, touring Rio’s different churches and participating in various catechesis sessions given by various bishops and cardinals.

On Friday morning, the Jesuit group was surprised to discover that Cardinal Timothy Dolan, the archbishop of New York, was giving a catechesis at the parish where we were staying. We enjoyed hearing his presentation, as well as asking him questions. He graciously posed for pictures with us, as well.

Pope Francis arrived at Copacabana Beach on Thursday, and after a week of torrential rain in Rio, the All Night Vigil and Papal Mass were moved to Copacabana from an airfield that was now flooded and infested with at least five crocodiles.

We headed out early Saturday morning to the beach to claim the spot where we would spend the next 24 hours. After a 9-km walk, we found space in the crowd of approximately 3 million people.

The next morning, a beautiful sunrise greeted us and Pope Francis celebrated the Mass, the spiritual highlight of the entire pilgrimage. At the end of the Mass, the pontiff announced that the next World Youth Day would take place in 2015 in Krakow, Poland, the homeland of soon-to-be-canonized Pope John Paul II. 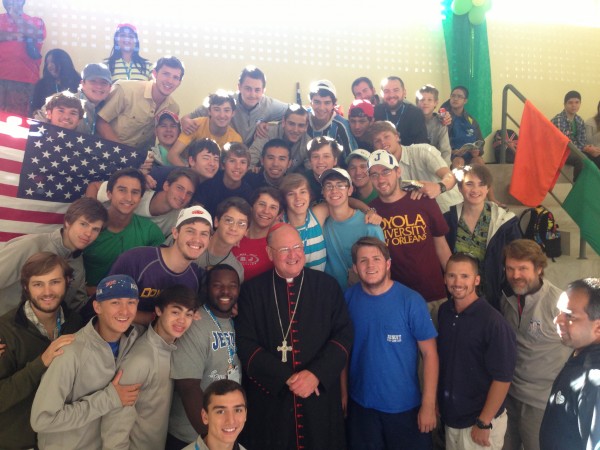 Cardinal Timothy Dolan, the archbishop of New York, was among the many religious leaders from around the world who made presentations to the pilgrims. Cardinal Dolan (center) shared stories and laughs with the Jesuit pilgrims. Photo by Mr. Jeremy Reuther.

As we prepared to conclude an unforgettable pilgrimage, we traveled to one of Brazil’s most sacred spots – up Corcovado Mountain to the site of the statue of Christ the Redeemer. As the sun went down, we witnessed the city’s skyline at night, embraced by the arms of Christ, a fitting conclusion to another successful World Youth Day pilgrimage.