Malcolm Up the Middle 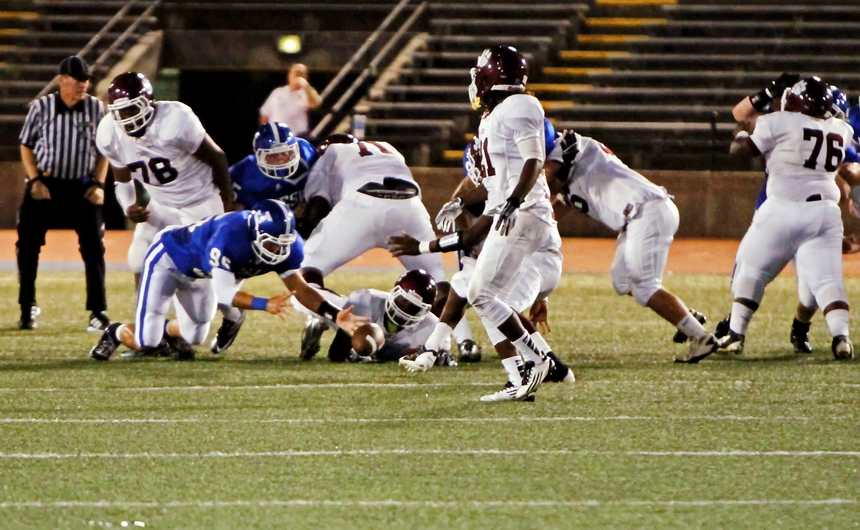 Senior defensive end Jack Hebert pounces on this Tiger fumble, ending a Pensacola drive deep in Jesuit territory. The play essentially sparked the Jays and made them roar.

Pensacola brought the beach to Tad Gormley Stadium on Friday evening and the Blue Jays must have felt like they were frolicking in the sand, sending the Tigers back home with a 28-7 spanking. In the renewal of a fierce interstate rivalry between the two teams, the Jays looked sluggish for most of the first quarter, as if they were running on soft sand wearing heavy boots. The Tigers showed up to play football and their defense initially stymied Jesuit’s offense while Pensacola’s offense kept the Jays’ defense off balance and guessing.

The Blue Jays didn’t begin to roar until senior defensive lineman Jack Hebert recovered a Tiger fumble that ended a lengthy drive deep in Jesuit’s territory. The fumble recovery ignited the Jays’ offense which effectively kicked a few buckets of sand at the Tigers.

Jesuit’s junior workhorse, running back Malcolm Ben, carried the offensive load and even pulled off a “hat trick” of sorts by scoring three touchdowns. A fourth TD was scored by junior tight end Alex Rabalais, who was wide open in the end zone when quarterback Trey LaForge floated a one-yard pass to him. Sophomore kicker Crew Jacobs kicked all four PATs.

The Jays have a short week because they play East Jefferson on Thursday, Oct. 3 at Joe Yenni Stadium. Kickoff is 7 p.m.

Read the Coverage of the Game