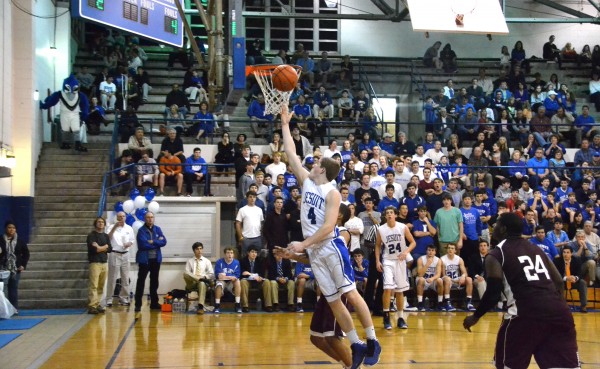 Senior Sean Tillery scores the game-winning shot at the buzzer.

Prior to tipping off against the Chalmette Owls, Jesuit recognized seniors Cody Castle, Josh DeBlieux, Matt Felger, Preston Reisig, and Sean Tillery with a special ceremony.

In the district match-up against Chalmette in the Jesuit gym on Friday, Feb. 1, Jesuit led the game 11-10 at the end of the first and 21-17 at the half. Chalmette came back strong in the third period to make the Blue Jays fight all the way to the buzzer. Senior Sean Tillery shot the game-winning basket in the final seconds of the game to lift the Blue Jays over the Owls, 49-47.

Jesuit’s district 5A record now stands at 6-1. The Blue Jays are slated next to play a road game against Grace King on Tuesday, Feb. 5.