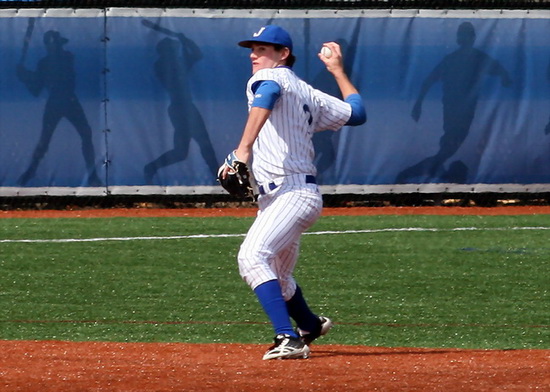 From a game earlier this season, senior shortstop Michael Cusimano (3) prepares to make a long throw to first base for an out. Solid pitching, tenacious defense,and timely offensive play prove to be the perfect recipe for a 4-0 Blue and White weekend at the Jay Patterson Shootout.

On Thursday night, the Blue Jays defeated the East Ascension Spartans, 6-0. in the opening round of the Jay Patterson Shootout in Gonzales, Louisiana. Sophomore pitcher Jack Burke (11) threw a complete seven-inning game, striking out 10 batters. Offensively, junior Brandon Sequiera (10) started the scoring drive with a double and then later scored on a single by Nathan Zimmer (13).

Nola.com Recap of the Jesuit vs. East Ascension Game

On Friday afternoon, Jesuit won a tight contest over the Dutchtown Griffins, 6-5. Senior pitcher Brett Leonhard earned his second win of the season. Offensively, senior Mitch Alexander led the team going 2 for 3 and driving in one RBI.

Nola.com Recap of the Jesuit vs. Dutchtown Game

Congratulations to Jesuit’s varsity baseball team for going 4-0 to sweep the competition at the Jay Patterson Shootout this weekend. The Blue Jays are currently enjoying a seven-game winning streak.

8-2, at St. Amant High School. In the St. Amant game, junior C.J. Avrard (1-1) was the winning pitcher. In the Destrehan contest, senior pitcher Cody Migliore (4-0) chalked up his fourth win this season. In both games on Saturday, junior Nathan Zimmer (13) proved to be the offensive catalyst in securing both wins by slamming a homerun against St. Amant and going 2 for 2 against Destrehan.