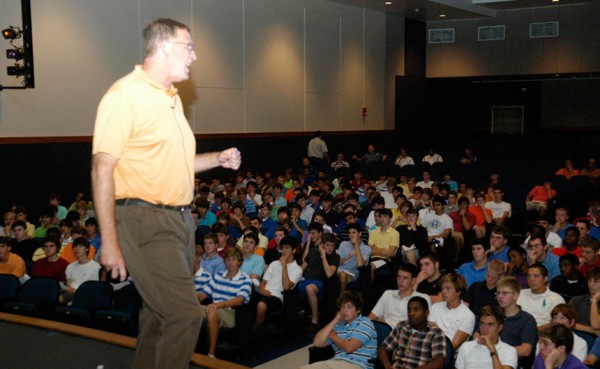 Jesuit principal Peter Kernion and athletic director Dave Moreau invite and encourage parents of current Blue Jays and alumni with children of all ages who participate in organized sports to an event at Carrollton and Banks on Tuesday, Oct. 22 to learn more about the role that parents play in athletics. There is no charge for this event that begins at 7 p.m. in the Jesuit High School Auditorium.

Rob Miller, who is a partner of Proactive Coaching, an organization that conducts workshops and seminars on the various facets of character-based athletics, will discuss an array of topics, including stages of athletics; shared expectations; red flags for parents; the role of parents during competition that enhance a child’s performance; confidence building; and life lessons for student-athletes.

Miller is a former high school (boys and girls) and college basketball coach. He currently serves as the commissioner of the National Association of Intercollegiate Athletics’ Wolverine-Hoosier Athletic Conference. This is Miller’s third trip to Jesuit. In 2011, he presented to Jesuit coaches and members of the Blue Jay Club Executive Board about life lessons in athletics and building successful teams. In 2012, he gave a similar presentation to Blue Jay student-athletes.

“Mr. Miller’s presentations are powerful, pertinent, and helpful, while aligning with Jesuit’s mission of developing men of faith and men for others, said Kernion ’90.

“I’m confident that parents will benefit the same way our coaches and student-athletes have,” Moreau added.