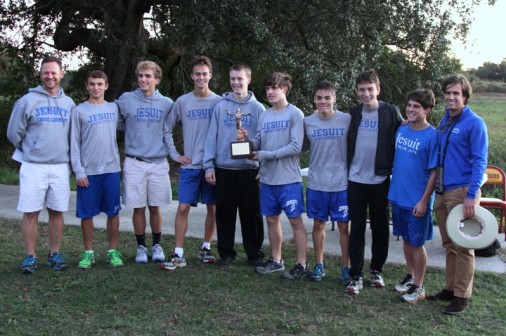 After winning metro and district titles, the 2013 Blue Jay cross country team is heading to Natchitoches for the state championship meet on Tuesday, Nov. 19. The LHSAA event featuring schools from across the state is held on the campus of Northwestern State University.

Horvath and assistant coach Taylor Bacques ’09, who ran cross country for the Jays when he was a student at Carrollton and Banks, will bring the team’s top 12 runners. However, only seven runners from each school are allowed to run the race.

Those expecting to answer the starting gun are seniors Liam Fitzgerald and Jonathan Blanchard, juniors Ben D’Antonio, Patrick Lacour, Michael Schwing, and Matthews Vargas, and sophomore Johnny LaForge. Senior Sean Stephens, who ran in the district meet, is ready if called upon.

The championship course is approximately three miles. The boys 5A race is the last race of the day and is expected to start at 2:45 p.m.

Last year senior Neil Fitzpatrick took home the individual state championship trophy, crossing the finish line of the 5K race in 14:54 — shaving one second off the school’s previous record. The Jesuit team finished third behind winner West Monroe and St. Paul’s, who is considered one of the favorites to take home the 2013 crown.