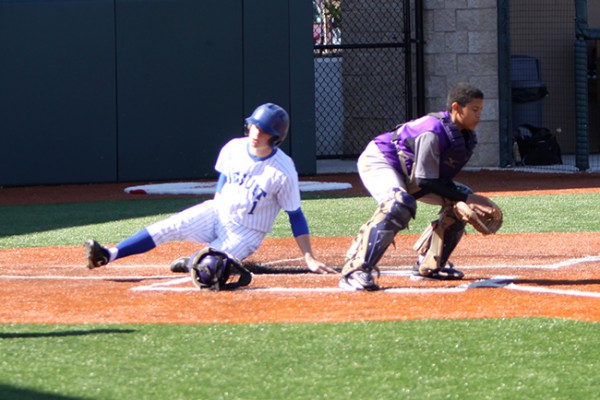 It was a multi-hit game for junior Blake Baker, who helped the Blue Jays get on the board late in the fifth inning when he drove in junior Brandon Sequeria. Late in the seventh inning, junior Spencer Miller reached base on an infield error. With the bases loaded, clean-up hitter Dylan Weston was walked, which brought home the game-winning RBI.

With the win, Jesuit improved to 4-2.

Nola.com Recap of the Jesuit vs. Northshore Game in the Jesuit Invitational

Jesuit fell on the short side of a pitching duel against the Shaw Eagles, 2-1 in the feature game of the Jesuit Invitational on Friday, March 1 at John Ryan Stadium. Junior right-hander C.J. Avrard suffered the hard luck defeat (0-1) in going the distance, scattering seven hits while notching five strikeouts. Shaw senior J.P. France, a Tulane commitment, struck out 17 Blue Jays en route to the victory.

Centerfielder senior Mitch Alexander picked up the only two Blue Jay hits on the evening and scored the only run for the home team in the first inning. After Alexander lined a hard shot to left, junior Blake Baker was hit by a pitch. After one out, the duo successfully executed a double steal placing runners at second and third. Cleanup hitter senior Dylan Weston plated Alexander with a fielder’s choice ground out to third base.

Alexander’s second hit leading off the third inning provided the Blue Jays with the only other scoring opportunity they had in the contest. After loading the bases with one out, France picked up two key strikeouts to end the possible rally. No other Blue Jay reached base in the final four frames. Following the Blue Jay threat in the bottom of the third, the Eagles’ two-run rally in the top of the fourth proved to be enough in deciding the game’s outcome.

Nola.com Recap of the Jesuit vs. Shaw Game in the Jesuit Invitational

Congratulations to the Jesuit varsity baseball team for their 7-3 team win over the Lakeshore Titans at the Jesuit Invitational held at John Ryan Stadium.

On a cold but sunny Saturday afternoon, sophomore Jack Burk (1-0) earns the win pitching a complete game and striking out 8 Titians. Offensively, senior Mitch Alexander had three hits (one a triple) and drove in three runs. Senior Dylan Weston drove in two runs on a double.

Nola.com Recap of the Jesuit vs. Lakeshore Game in the Jesuit Invitational

Sophomore catcher Trent Forshag hit a double while senior teammate Mitch Alexander went 2-for-2. The Blue Jays posted a great showing at their home tournament, getting complete game efforts from all four of their starting pitchers while remaining error free on defense. With Sunday’s win over the Purple Knights, Jesuit improved to 6-3 on the young season.

Nola.com Recap of the Jesuit vs. St. Augustine Game in the Jesuit Invitational