Despite Published Reports in Newspapers and Online, the
Jesuit-Brother Martin Game Has NOT Been Moved to
Hoss Memstas Stadium 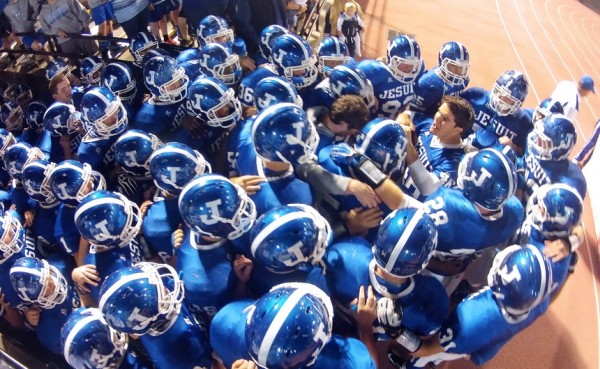 Jesuit and Brother Martin butt helmets in Friday night’s 45th meeting of the longtime crosstown rivals. Kickoff for the game is 7 p.m. at Tad Gormley Stadium, despite the Voodoo Fest playing simultaneously in City Park.

This year’s tilt between Jesuit and Brother Martin promises plenty of skirmishes on the field of Tad Gormley Stadium as well as off the field in City Park. In fact, the skirmishes might be more intense off the field as parking for fans of this rivalry will be highly competitive.

The annual Voodoo Festival begins approximately the same time the Jays and Crusaders kickoff (7 p.m.). The fest fans are expected to swell the numbers of drivers who will be scouting, some frantically, for the few available parking spots.

Both Stadium Drive and Roosevelt Mall will be closed to on-street parking for the game.  Paid parking is available inside the stadium grounds and in the Marconi lot for $7 per car.  Delgado also will have a lot available for parking at $10 per car.

The best advice is to arrive as early as possible and be prepared to encounter Mardi Gras-like parking issues.

The series between the two teams is tied at 22 apiece, so whichever team wins tonight will enjoy a one game advantage.

Both teams have identical 4-4 overall records (1-2 in District 9-5A). Three of Jesuit’s losses were dealt in the final seconds of each game, including last week’s Homecoming overtime battle against Archbishop Rummel (24-21).

Tickets for the game are available up until 4 p.m. at Jesuit’s switchboard (entrance is the blue awning on Banks Street). Admission for adults is $6 and $3 for children (ages 6-11). Tickets at the gate are $8 for adults and children.

Broadcasts of the Game

WWL Radio plans to stream the game online. To listen to the broadcast on a computer or mobile device, go to: http://www.meridix.com/everywhere.php?liveid=wwlprepsports.

WHNO-TV (Channel 20 on Cox Cable) also plans a live streaming broadcast of the game (audio and video). To access that broadcast, go to: http://sportsnola.com/sports/live-streaming-game-video.html.

WHNO-TV will air the game on Saturday, Nov. 2 at noon.