Blue Jays Bask in a Shutout of the Crusaders, 20-0 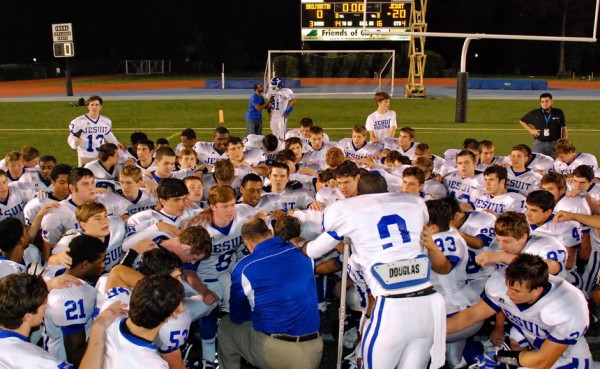 Jesuit coach Wayde Keiser and his team of Blue Jays take a knee in prayerful thanks following a well-deserved “20-nothing” shutout of Brother Martin on Friday night at Tad Gormley Stadium.

If there was voodoo in the air for the Jesuit – Brother Martin game on Friday evening at Tad Gormley Stadium – and there was plenty – the Blue Jays did their absolute best to ignore the distractions.

The Jays successfully blocked out all the crazy energy pulsing from the adjacent Voodoo Festival in City Park to stake their first shutout of the season. Coming on the heels of a disappointing overtime loss to Archbishop Rummel the week before, the Jays earned a great victory over the Crusaders with nary an assist from the likes of thaumaturgists, gris-gris artists, or local neighborhood ghostbusters.

In defeating Brother Martin, 20-0, the Blue Jays (5-4 overall; 2-2 in district) did it the old-fashioned, super, and natural way – with a lively, come-to-life-in-the-second-half offense that put up two touchdowns and a pair of field goals, and a pertinacious defense that seemed to know exactly what the Crusaders were up to on every play.

Next Week: Jesuit vs. St. Augustine

So last night’s shutout by Jesuit could be considered payback for the 2008 game. The win gives Jesuit a one game advantage in the crosstown rivalry, 23-22. More importantly, it provides a huge lift to the Jays as they prepare for their annual royal battle against St. Augustine.

In the final week of the regular season for the resurrected Catholic League, the Jays and the Purple Knights will clash on Thursday, Nov. 7, once again at Tad Gormley Stadium. Kickoff is at 7 p.m.

And how about this – these two rivals will be playing in the 47th game of the series, which is currently tied, each team having won 23 games. Thursday night looks to be another series tie-breaker. Just as long as the Blue Jays don’t experience another heart-breaker.