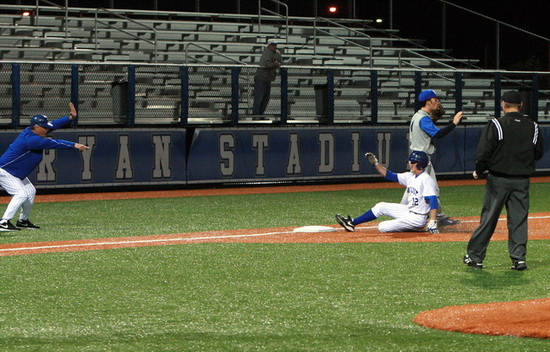 Take Your Base! Jesuit head coach Joey Latino (left) stops sophomore designated hitter Ben Hess (12) at third base. Ben’s triple clears the bases and begins a scoring barrage which eventually led to the imposition of the 10-run rule in the fifth inning. Jesuit wins over Mandeville, 11-0.

By their performance Tuesday night, Jesuit’s varsity baseball team undoubtedly enjoys the friendly confines of their home field, John Ryan Stadium. From the opening of the game, the Blue Jays dictated the tone of play against the Mandeville Skippers and won the contest 11-0 in five innings. It helps when the starting pitcher is in the zone, the defense is playing error free ball, and the offense hits singles, doubles, and triples seemingly with ease.

Senior pitcher Cody Migliore (14) earned his second win of the young season, pitching a no-hitter in five innings and striking out 10 Skippers.

Offensively, a complete team effort from putting men on base to bringing them home brought the game to an early end and a win for the Blue Jays.

Nola.com Recap of the Jesuit vs. Mandeville Game

Nola.com Stats of the Jesuit vs. Mandeville Game