Back to Banks: Alumni Service Corps Turns Alums to Teachers

Along with various other changes in the administration of Jesuit High School, this year marks the beginning the Alumni Service Corps.

The new program invites Jesuit alumni who have recently graduated from college to return to Jesuit to teach for a year and participate in the school’s overall community life. The Alumni Service Corps is patterned on similar programs at other Jesuit schools around the country. 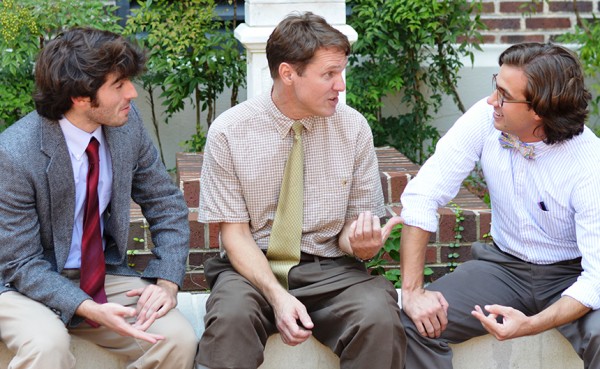 Mr. Michael Prados inaugurates the program this year as its director, serving as a guide and mentor for the alumni participants. As an alum himself, Class of 1983, and having served as former director of Student Activities for the past 10 years, Mr. Prados has a special feel for the pulse of student life here. He also has a deep understanding of the Jesuit mission of service. Working with the Jesuit International Volunteers, he spent three years in the Marshall Islands after college. Here at his alma mater, he has regularly led the Appalachia service trip, and was director of Service Projects for five years.

The program is built on four basic components: service, simplicity, community, and spirituality. Throughout their work with Jesuit High School, the participants will live out and promote these four ideals.

Mr. Fitzpatrick and Mr. Bacques are each teaching two pre-freshman classes and helping out with various programs and co-curricular activities throughout the school.

They will also attend retreats and service day projects, help out tutoring, and assist with the newly formed Magis Program run by Mr. James Michalik, and assist in the Development Office.

They are living in a Jesuit-owned house in the neighborhood, living in simple community. Ignatian spirituality is also a significant aspect of the program, through which the participants are able to continue to discern their future through spiritual direction and interaction with the community of Jesuits here on campus.

As the founding participants in the program, Mr. Bacques and Mr. Fitzpatrick shared their thoughts on the journey so far with The Blue Jay.

The Blue Jay: Why did you apply to the Alumni Service Corps?

Mr. Daniel Fitzpatrick: Fr. Fitzgerald suggested it, and that was enough for me. But also, my grandfather was very poor growing up and wanted to attend Jesuit. So he got a scholarship and came here, and to him Jesuit was the turning point in his life. Later on he was offered a job in Brazil but instead he decided to come back to teach at Jesuit because he felt he owed it to the school.

Mr. Taylor Bacques: I realized I didn’t know what I was going to do after college. I thought I was going to apply to Law School but didn’t. This program offered a great transitional year to re-center myself and get back to my roots and get introduced to teaching and volunteer work.

TBJ: What are your expectations?

DF: I expect to grow a lot spiritually through simplicity and spiritual direction by [Jesuit President] Fr. Fitzgerald and serving the young in spiritual areas. I also expect I will learn a lot through teaching.

TB: I expect to get introduced to teaching and understanding what it’s about and the nuances connected to it and get my feet wet. Also being reintroduced to the Jesuit High School community after going away for college and be reintegrated into the way things are done here and the community. I am also looking forward to this position being a service position and getting to know the students in all different areas.

TBJ: What is your favorite aspect of the program, and of teaching so far?

DF: The spirituality, nothing is more important than growing closer God. I also enjoy spending time with the students. They are absolutely hilarious.

TB: I most enjoy trying to find a way to reach every single student no matter what I am teaching. Finding that way and maneuvering the lecture to reach all the students, which definitely was something I didn’t appreciate as a student, but I do now.

TBJ: What are you most looking forward to this year?

DF: Helping the young men and striving to be an example for them.

TB: I’ve really enjoyed teaching so far. It’s exhilarating and challenging. I’ve loved getting to know the students and loving being in the classroom.