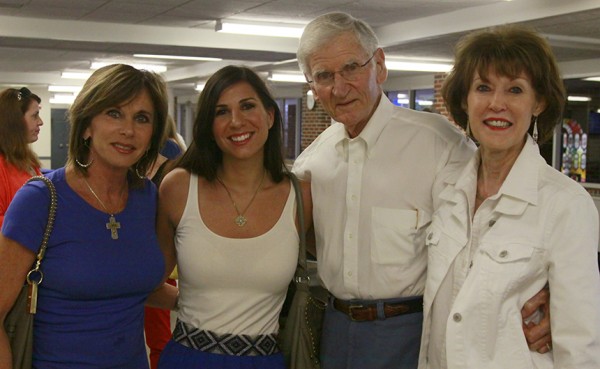 Phil Foto ’46 is surrounded by his family, daughter Carol Foto Carimi, granddaughter Alexis Carimi, and wife Davey at the pre-game reception. Phil played in the inaugural contest against the Tigers in December 1945. He was the honorary captain for the coin flip at Friday night’s renewal of the rivalry.

From 1946 to 1966, the Jesuit Blue Jays and the Pensacola Tigers met each fall on the football field in what became a fierce interstate rivalry. The series was full of drama and great moments and created great memories for all involved. The two teams had not met on the gridiron for nearly 50 years until Friday, Sept. 27, when Jesuit left with a 28-7 victory over Pensacola.

Prior to the game, members of the Jesuit and Pensacola teams from 1946-1966 gathered for a pre-game reception in the Student Commons. The event attracted several alumni from both teams and was highlighted by a delicious barbecue dinner.