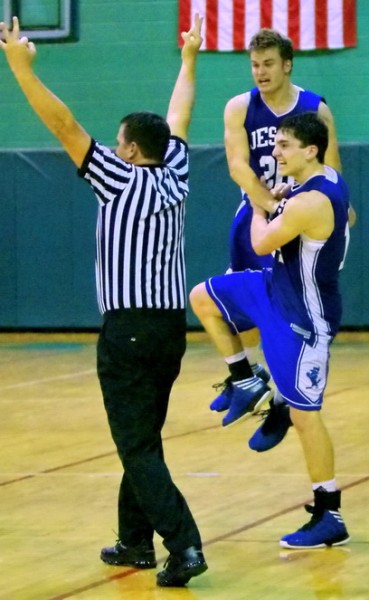 Senior Josh DeBlieux congratulates senior Matt Felger after he hit a 3-point jump shot at the buzzer to send the game into overtime.

In the Blue Jays’ consolation game against St. Augustine Saturday afternoon, senior Matt Felger’s sunk a 3-point jump shot at the buzzer to tie the game at 44 and send it into a four-minute sudden death period. However, the Jays suddenly looked lifeless, scoring only three points in overtime to the Purple Knights’ 11. Final score: Jesuit 47, St. Aug 55. Felger was high scorer for Jesuit with 17 points, followed by junior Riley Conroy with nine, senior Preston Reisig with seven, and sophomore Trey Laforge with six points. The Jays return to action at home on Tuesday, Dec. 11 when they play a non-district game against Holy Cross. Tip off is at 7:15 p.m.