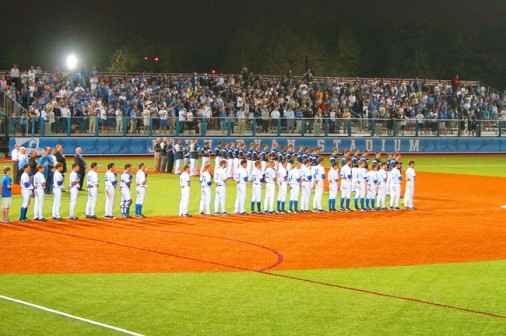 Blue Jays, Tigers, dignitaries, and fans face the flag for the National Anthem prior to the start of the first game at John Ryan Stadium on Friday, March 2, 2012.

At precisely 7:48 p.m., Blue Jay senior picher Emerson Gibbs dug into his glove, reared back, and zipped a ball toward the plate to open a new era of Jesuit baseball. One hour and 40 minutes later, the overflow crowd of 1,472, most of whom were Jesuit supporters, left for home happy as the Blue Jays defeated rival Holy Cross, 6-1, in the inaugural game at John Ryan Stadium on Friday, March 2.

The contest was the culmination of several years of planning, 11 months of construction, and countless hours of preparation. For the first time in Jesuit’s history, the Blue Jays have a home field to call their own. Gibbs’ complete-game effort on the hill made the wait all worthwhile.

“I tried my best to describe to (the team) what this was going to be like, but I think I fell short,” Jesuit head coach Joey Latino said of the atmosphere on Friday. “This was amazing. We talked about how there wouldn’t be an empty seat from the foul line and into the grandstand, and we kind of fed it to them all week so we would at least have some sense of preparation. Beyond that, we just talked about how it’s still baseball, it’s still seven innings. Let’s go out and pitch it, catch it, come through offensively when we need to and that’s what we did tonight.”

Gibbs struck out three and gave up just three hits and an unearned run along the way. He got plenty of help from his offensive mates who smacked eight hits, including a 2-for-3 performance by senior third baseman Christopher Prieur. With the win, the Blue Jays improve their overall record to 4-2.

Jesuit wasted little time jumping on the Tigers. Shortstop Armand Daigle drew a one-out walk in the bottom of the first and senior catcher Matt Robért recorded the first hit at the stadium when he hammered an RBI double to straight-away center. Robért’s, whose stand-up double scored Daigle, is also credited with the first RBI at the stadium. Sophomore Spencer Miller, the Jays’ designated hitter, made it 2-0 two at-bats later with a run-scoring single through the left side of the infield.

Following a scoreless second, Holy Cross cut the deficit in half as Ryan Taylor ripped a leadoff single up the middle, advanced to third on a Blue Jay error and scored on a sacrifice fly to right off the bat of Kyle Gardner. That was the lone blemish on Gibbs’ performance as he allowed just three baserunners the rest of the way and sat down the final seven batters he faced.

Jesuit got the run back in the fourth when Miller was plunked to open the frame and scored on a double to the base of the wall in left by Prieur. Two innings later, Jesuit blew the game open as first baseman Michael Gogreve and Miller opened the frame with a triple and a walk, respectively, and the duo came around to touch the paystation on consecutive RBI-singles by Prieur and right fielder Alex Roy. Senior left fielder Austin Duncan capped the scoring with a run-scoring single up the middle to plate Prieur from 90 feet away.

“You want to come out of the gates quickly against any opponent, Holy Cross included,” said Coach Latino. “The one thing I was disappointed in was after that first, we went soft for two or three innings. The score got back to 2-1 and it looked like it put a sense of urgency in our kids. We answered that run an inning later and we got the three separation runs in the sixth.”

The Blue Jays return to action on Saturday, March 3, when they host Archbishop Shaw at 5:30 p.m. at John Ryan Stadium. The varsity contest is the second half of a pseudo doubleheader as Jesuit will host the Baseball Alumni Game at 2:30 p.m. In that contest, former Jesuit standouts will square off in a friendly game of slow-pitch softball.

Plenty of tickets are available for Saturday and Sunday games and may be purchased at the stadium.