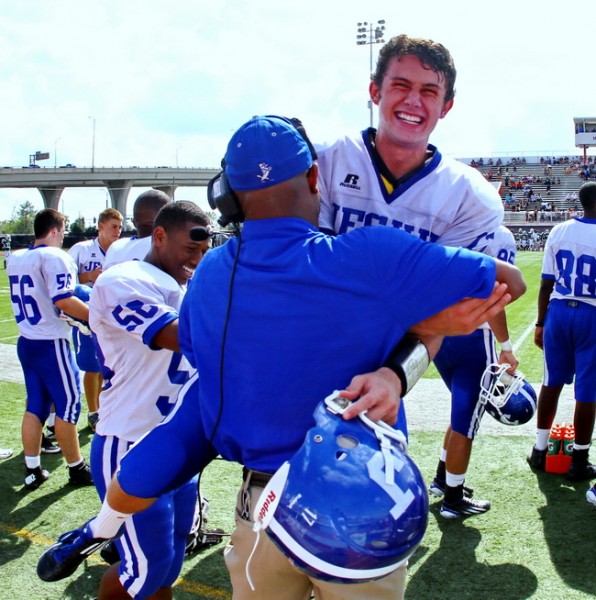 Senior quarterback Tanner Lee was named “Metro Player of the Week” for his spectacular performance in last Saturday’s thrilling 56-49 win over Archbishop Shaw. Lee was 23-of-32 for 552 yards and seven touchdowns, four of which landed in the hands of senior wide receiver Matt Hackney. Lee also tossed TD passes to Mitch Alexander, senior wide receiver Dontayue Fly, and sophomore tight end Foster Moreau. Freshman kicker Crew Jacobs added six extra points and hit two field goals. A two-point conversion after Jesuit’s last TD was good. The Blue Jays take on the Cavaliers of De La Salle in the Archbishop Hannan Classic this Friday afternoon at Tad Gormley.Kickoff is 3:30 p.m. and the game will be broadcast live on WRBH 88.3 FM. 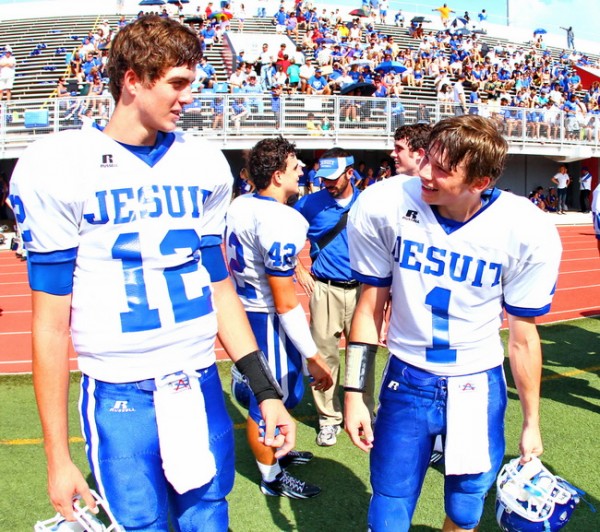 Jesuit senior quarterback Tanner Lee has been chosen as the R&L Carriers Greater New Orleans Quarterback Club, Sportsnola.com and WGSO, 990 AM Prep Player of the Week for Week #3.

A 6’4, 196-pound senior, Lee had an amazing performance in rallying Jesuit to a last minute 56-49 victory over Archbishop Shaw at Hoss Memstas Stadium this past Saturday afternoon.

Lee set school records for passing yards and touchdown passes against the Eagles. He completed 23-of-32 for 532 yards and seven touchdowns with no interceptions.

A Tulane commitment, Lee is coached by Wayde Keiser. He will be honored at the year-end Greater New Orleans Quarterback Club luncheon on December 10 at Manning’s Restaurant. 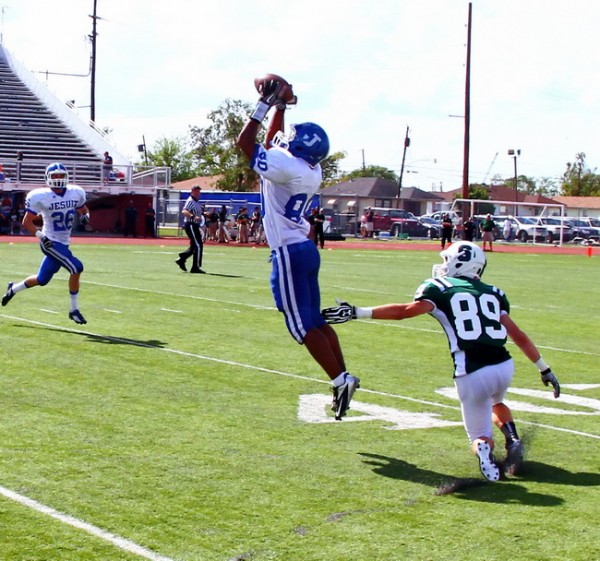 (Courtesy of The Times-Picayune and Nola.com)

With Jesuit trailing Shaw by a point and just 18 seconds left in the game, Jesuit quarterback Tanner Lee dropped back and threw the same pass he has been practicing for three years.

Lee found Matthew Hackney in the end zone for a 24-yard touchdown as Jesuit rallied for a thrilling 56-49 non-district victory at Hoss Memstas Stadium on Saturday afternoon.

“We were just trying to stay focused,” Lee said. “We couldn’t think about the last touchdown because we just needed to get a field goal or a touchdown to win. The guys played hard, and our conditioning paid off on that last drive.”

Hackney, who finished with 12 receptions for 284 yards and four touchdowns, said the sideline route had been successful throughout the game.

“It was a double move, so when I saw him bite, I knew (Lee) was going to put the ball where it needed to be, and he did,” Hackney said. “There’s no better feeling than getting this win.”

The teams combined to gain 1,168 yards. Lee was 23-of-32 for 552 yards and seven touchdowns. Mitchell Alexander had six catches for 172 yards and a score while Foster Moreau and Dontayue Fly each caught a touchdown. Freshman kicker Crew Jacobs hit two field goals, which were the difference in the game.

“A lot of credit goes to Shaw because they’re a good football team,” Jesuit coach Wayde Keiser said. “We could not stop them, and they could not stop us. It was who was going to have the ball last. I’m proud of our mettle, and that we answered after being down. I’m happy with the way we hung in there. What I’m not happy about is the things that we didn’t do well like we didn’t tackle well, and we gave up big plays.”

Shaw quarterback Quentin Gibson matched Lee’s performance throughout the three hour and 13 minute contest. Gibson was 32-of-48 for 503 yards with seven touchdowns and one interception. Gibson threw to nine different receivers including Kent Shelby, who had six catches for 222 yards and three scores. Bryson Simmons, Cameron Troxler, Ryan Duncan and Brennan Falcon each caught touchdown passes.

“(Gibson) played a terrific game. It was probably the best game that I’ve ever seen him play,” Shaw coach Scott Bairnsfather said. “His decisions were good. His receivers were good, and he was really throwing the ball accurately.”

The score could have been even higher if not for a combined 224 yards of penalties.

The late game drama started when Shaw took over at its 45-yard-line trailing 48-42 with 4:08 left. The Eagles drove 55 yards in eight plays. The drive seemed to stall after a holding penalty set up a second and goal from the Jesuit 13, but Gibson found Troxler on a hook route near the line of scrimmage. Troxler dodged one tackler and raced to the end zone to give the Eagles the lead with 1:38 to play.