Blue Jays Fall to John Curtis in the Birdcage, 49-44 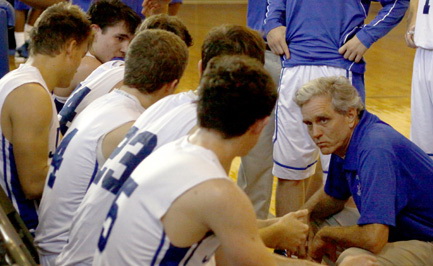 Coach Chris Jennings speaks to his team during a timeout.

The Blue Jays suffered a loss after a hard fought battle against John Curtis on Saturday, Dec. 15, in the Birdcage. Curtis jumped out to an early lead in the first quarter, but the Blue Jays battled back. Two 3-pointers by junior Riley Conroy helped cut the deficit 11-10 in the second quarter. Despite several lead changes during the third and fourth quarters, the Blue Jays ultimately fell to John Curtis, 49-44. The team returns to the court when they take on Archbishop Shaw on Thursday, Dec. 20, at 7 p.m. in the Birdcage.