Blue Jays Are All Business in Caging the Tigers 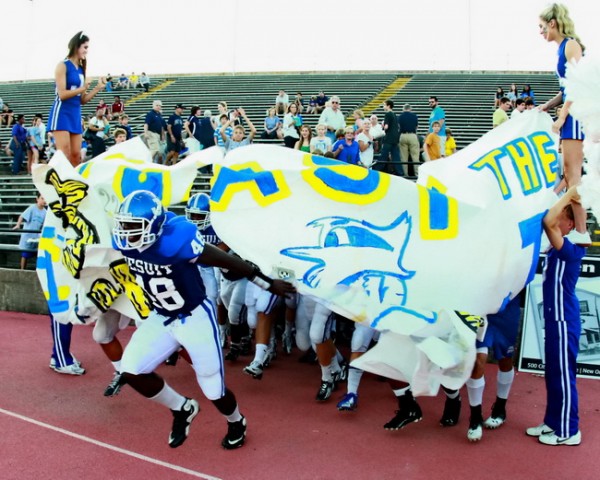 The Two Teams’ 93rd Meeting on the Gridiron

The long city rivals, Jesuit and Holy Cross, met for the 93rd time at Tad Gormely Stadium on September 9, 2012 for the Great American Rivalry Game.

The day started with a parade down Tad Gormely Stadium’s driveway featuring the 610 Stompers, the Blue Jay Band, and the “Legend of the Game” honoree, Chris Markey ’04. From 2000-2003, Chris Markey ’04 established himself as one of the great running backs in New Orleans prep football history. As a running back and kick returner, Chris accumulated statistics in the Jesuit – Holy Cross rivalry that are and will remain records for years to come. As a freshman in the 2000 contest, Chris returned a kickoff 96 yards, tying the Jesuit record for the longest kickoff return. As a senior in the 2003 game, he rushed for 303 yards and a school record 6 touchdowns. Chris holds every rushing record in Jesuit history: most career, season, and game rushing yards, touchdowns, and points scored. In the 2003 season, Chris rushed for more yards and scored more touchdowns that any other player in the history of New Orleans prep football. 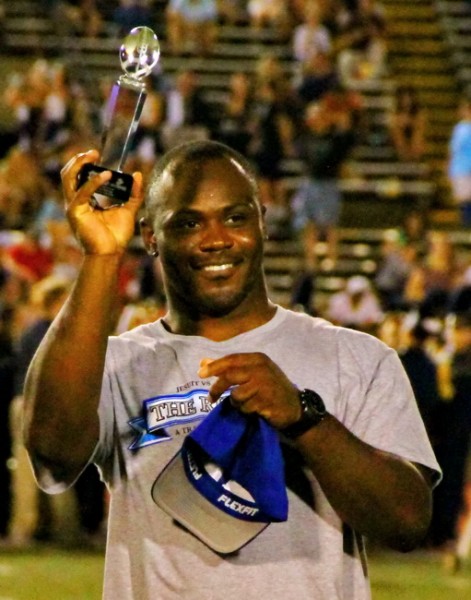 On the Holy Cross side, halfback and track and field athlete Joe Heap ’50, who passes away a year ago, was honored posthumously as a “Legend of the Game.” His wife Joanne Heap accepted the award on behalf of the family along with his brother

The Most Value Player for the Great American Rivalry Game was Jesuit’s sophomore running back Charles Jackson, who carried the ball 20 times, gained 81 yards, and scored one touchdown. Also, senior defensive back Josh DeBlieux was selected by officials with the Great American Rivalry Series as Jesuit’s Scholar Athlete of the game. Jesuit will keep the Golden Football for another year and the title as the winner of the 93rd meeting between the two city rivals. 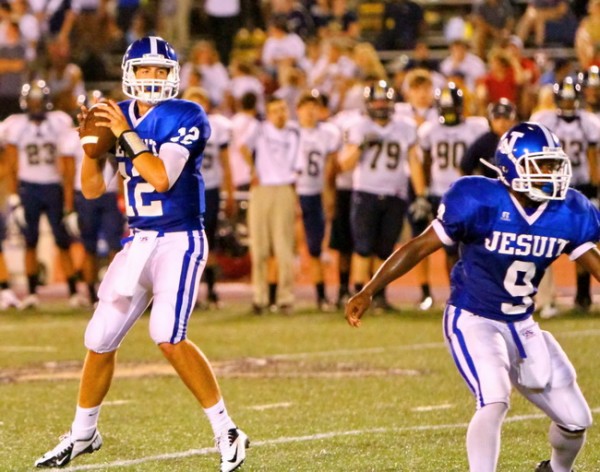 Two weeks in the making thanks to an unwelcomed visit from Hurricane Isaac, the 93rd meeting between Jesuit and Holy Cross was not without its moments.

Most of those belong to the host Blue Jays, who combined a workmanlike defensive effort with the respective passing and running of senior quarterback Tanner Lee and sophomore running back Charles Jackson to carry Jesuit to its fifth consecutive victory in the storied series, a methodical 21-7 decision, Friday night at City Park’s Tad Gormley Stadium.

Lee passed for 143 yards and a touchdown while Jackson’s 74 yards paced a methodical rushing attack that produced 118 yards and the Blue Jays other two touchdowns.

Only a Hail Mary completion on the final play of the first half prevented Holy Cross from being shut out for a second consecutive season as Jesuit increased its series lead to 54-37-1. The 1937 meeting between the schools, which ended in a 6-6 tie, is listed officially as a no contest by virtue of a Louisiana High School Athletic Association ruling.

“We expected the game to be a war,’’ Lee, a Tulane commitment, said after completing 11 of 21 passes without being intercepted. “With all of the intensity and rah rah that goes with this game we knew it was going to be a fight. Every play was a fight. Nobody took a single play off.’’

Jackson was named the game’s Most Valuable Player after carrying 19 times and scoring untouched on a 1-yard run midway through the third quarter for the game’s final touchdown.

Lee directed a pair of impressive scoring drives covering 81 and 73 yards and ended the first with a 14-yard scoring pass to junior wide receiver Nathan Zimmer that opened the scoring in the second quarter. Senior running back Kalan Minnard tallied Jesuit’s second touchdown of the period that increased the Blue Jays advantage to 14-0 on the second of three successful PAT kicks by Crew Jacobs.

Although they threatened on several occasions, the Tigers’ lone score came via a 44-yard Hail Mary completion from junior James Tabary to sophomore wide receiver Michael Chigbu on the final play before halftime. The pass was tipped by at least one Jesuit defender before finding its way into Chigbu’s hands.

Lee and Jesuit answered in definitive fashion by opening the third quarter with a 12-play, 73-yard march that Jackson ended by walking in untouched off left tackle for the game’s final touchdown. Jesuit’s 34-yard drive to Minnard’s touchdown was set in motion by a fumble recovery by linebacker Jimmy Mickler.

The Tigers’ lone scoring drive covered 51 yards in four plays in the final 42 seconds of the second quarter.

“It’s the first game of the season. There’s a lot of stuff we’ve got to clean up, but I think that’s going on all around the state this week,’’ Jesuit Coach Wayde Keiser, who improved to 5-1 against Holy Cross, said referring to the week off many schools in southeast Louisiana experienced following Isaac’s destructive visit last week.

Tabary paced the Tigers offensively by completing 13 of 24 passes for 179 of Holy Cross’ 242 total yards with the touchdown to Chigbu. Tabary was intercepted once, in the end zone by Jesuit defensive back Ryan Helm in the final 73 seconds, to thwart a threat that was produced by a Jesuit fumble at the Blue Jays’ 6-yard line.

Jesuit’s defense had just held the Tigers on downs following a 62-yard drive that ended at the 3-yard line with three incompletions and a scramble of zero yards by Tabary.

“We played stupid ball, we made a lot of mistakes,’’ Holy Cross Coach Barry Wilson. Jesuit is a good football team. They played solid. I like their quarterback. But when you make mistakes like we did, you’re going to get beat.’’ 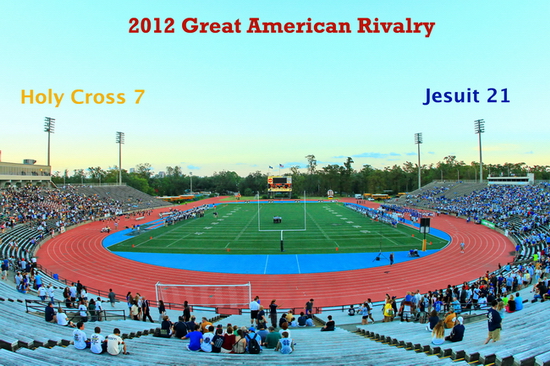 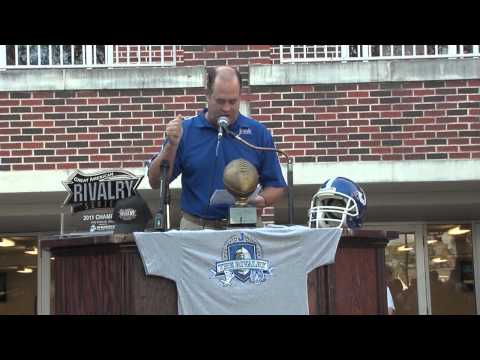