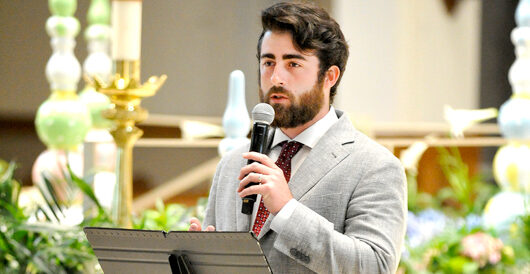 The following piece by writer Peter Finney, Jr. ’74 was published in the Catholic Sentinel on September 14, 2021.

NEW ORLEANS — Sept. 14 marked the 700th anniversary of the 1321 death of Florentine poet Dante Alighieri, whose epic poem, “The Divine Comedy,” continues to resonate today with its perceptive and reflections on the human condition and on humanity’s seemingly endless search for God.

For Jesuit High School alumnus Daniel Fitzpatrick, who as a teenager first read the poetic travelogue of a man wandering through hell, purgatory and heaven, the date also will mark a significant professional achievement.

Fitzpatrick, 30, recently finished a massive undertaking — translating all 14,000 lines of Dante’s work. His literary efforts will supplement 100 bronze sculptures by Canadian sculptor Timothy Schmalz – one for each canto in the poem — on display on “Dante Day,” Sept. 14, in Florence, Italy.

The irony, Fitzpatrick notes, is that the city of Dante’s birth is the same city that also cast the esteemed writer into exile for the last 20 years of his life, the result of his being on the wrong side of a bitter feud between two warring political factions, those who sided with papal authority in governmental affairs versus those who favored imperial authority.

“Dante was more in favor of imperial authority, and because of his political views, he was exiled in 1301,” Fitzpatrick said. “He was basically told, ‘All your land, all your property is confiscated. You are never to come back to Florence, and if you come back, you will be burned alive.'”

There’s even a 21st century battle for Dante’s remains, Fitzpatrick said. Dante was buried in Ravenna, 65 miles away, which has rebuffed recent efforts by Florence to reclaim its native son’s remains.

Fitzpatrick, who taught for three years at Jesuit High School in New Orleans and is teaching this year at Jesuit High in Tampa, Florida, said Dante’s bitter exile provided an inescapable backdrop for his poem, which asks questions about humankind’s ultimate home.

Wandering such as Dante experienced, Fitzpatrick said, produces a pain “of not quite being in the place where we ultimately belong.”

There are about eight major translations of Dante’s Italian poem — written in a three-line (“terza rima”) style with an A-B-A rhyme scheme. Fitzpatrick, himself a poet, decided to do his own translation after reading a suggestion from Ezra Pound that one of the ways to improve as a poet was to translate a great poetic work from a different language.

Since he had studied Italian at the University of Dallas and also had a chance to meet Robert and Jean Hollander, who had produced an excellent translation of “The Divine Comedy,” he felt it was “kind of an easy choice.”

“The text I was familiar with already,” he said. “It was just something I started to try to get to be a better poet.”

Through a philosophy professor at Holy Apostles College and Seminary in Cromwell, Connecticut, Fitzpatrick got connected with Schmalz, the Canadian sculptor, who on his own was crafting the 100 bronze “Divine Comedy” sculptures.

The result of their collaboration is a three-volume book based on the three themes of Dante’s poem — The Inferno, Purgatorio and Paradiso — which includes pictures of the 100 sculptures. The online version is also available at www.helpdantehelpitaly.com, with proceeds going to help with Italy’s response to the COVID-19 pandemic. The sculptures also can be viewed at www.dantesculpture.com.

The sculptures are approximately 18-by-18 inches, and Fitzpatrick said there are hopes to create Dante sculpture gardens in different cities around the world.

“There will be the whole ‘Divine Comedy’ set up in a garden so that you can walk through the whole poem,” Fitzpatrick told the Clarion Herald, archdiocesan newspaper of New Orleans..

In the end, he said, the poem uses simple conversations to discuss humans’ “fear, uncertainty and desire for ultimate rest in the contemplation of God.”

“It’s very easy to see ourselves in Dante, to see all of our brokenness and also the whole trajectory of where we aspire to be as Catholics,” Fitzpatrick said. “Along with that, Dante has a very stable vision of what human beings should be. All the suffering of Dante as the lost pilgrim at the start of the poem comes from a sense of knowing that there’s something better that we’re meant for — a sense of heaven.

“Even if people don’t articulate that, it’s really easy to identify with. From our own experience, we want to be happy, but then there is our sinfulness and anxieties. The poem is such a powerful vehicle for conversion and for constant renewal and for our striving for holiness.”

With three young children, Fitzpatrick doesn’t know if he will be able to attend “Dante Day” in Florence, but he does know there should be one very interested spectator.

“Even from the beginning with Dante, there was a tradition of people having huge sections of the poem memorized, just by word of mouth,” Fitzpatrick said. “That’s continued even to today. The most famous individual is a butcher in Florence who pretty much has the whole poem memorized. So, you go into his butcher shop, and he can quote Dante and make it relevant to anything you want to talk about.”