Hoss Memtsas stadium in Harvey was the site of a tremendous football game on Saturday Oct. 10, 2020, as both teams showed up to do one thing: score points. Both succeeded in this endeavor, but, when the dust settled, Brother Martin (2-0) claimed a slim victory against the Jays (1-1) by a score of 45-42.

As the final score would suggest, both teams hit the ground running on offense. The Jays received the opening kickoff and marched down the field with senior quarterback Luke LaForge slinging the rock most of the way. The prolific drive was capped off with a 3-yard throw to senior star wide receiver Luke Besh, and he was far from done.

Brother Martin came right back and scored a touchdown of their own, and the back and forth began.

On the second drive of the night, the Jays swapped quarterbacks putting in junior Jack Larriviere. The offense did not miss a beat as Larriviere used the combination of his arm and legs to move Jesuit down the field. Larriviere ended the drive with poise. On third-and-7, he delivered a dime to LaForge to keep the drive alive, and he dove toward the pylon for the score. The quarterback connection was a beauty to watch.

After the impressive drive, the Jays got a gift from the Crusaders. The Crusaders could not handle a tricky kick, and Jesuit jumped on the football and now had an opportunity to go up two scores.

The offense was suddenly back on the field but found themselves in a fourth-and-10 situation. There was only one place to go with the football.

Besh ran an out on the previous play but had the ball batted down. On the next play, he ran what appeared to be the same route but went up the field on the double move. LaForge complemented the perfect route with a perfect pass, and Besh eased his way into the end zone with a 35-yard score.

The Jays now found themselves up 20-6, but could not capitalize further. Brother Martin kicked a field goal, stopped Jesuit on the 1-yard line, and scored a touchdown with a two point conversion before halftime.

While the momentum seemed to shift toward the Crusaders, Jesuit still held a 20-17 going into halftime. The lead would not last long.

Brother Martin scored on a long run to start the half, but Jesuit responded immediately on the kickoff. Besh was back to receive and found a hole. He would eventually be stopped deep in Crusader territory, setting up an easy score to put the Jays back on top 27-24.

The back and forth continued, until Brother Martin scored on back to back drives and put the score at 38-27 in the fourth quarter. Despite the deficit, Jesuit refused to quit.

As he had done all game, LaForge put together another terrific drive and threw for a touchdown and found Besh for the two point conversion. The Jays defense came back onto the field and delivered a clutch stop to give the ball back to the offense with six minutes left with Jesuit only down by three points.

The two quarterback system worked all night, and Larriviere was now in the game to try and give Jesuit the lead. He did not disappoint. For the fourth time of the game, Besh found himself on the receiving end of a touchdown.

Jays held a 42-38 lead with 3 minutes left, but it would not be enough as Brother Martin scored with 14.8 seconds left and would eventually win a highly contested game by a score of 45-42.

Despite the loss, Jesuit looked terrific and has many positives to build on as they move on to face Holy Cross.

For the second game in a row, Besh had a terrific outing on the outside. He finished the game with 10 catches for 175 yards and four touchdowns. Max Milano pitched in for five catches and 53 yards to help the Jays passing attack.

Jesuit will now look to get back on the winning track against Holy Cross on oct. 17, 2020, at Strawberry Field in Hammond with kickoff set for 1:05 p.m. 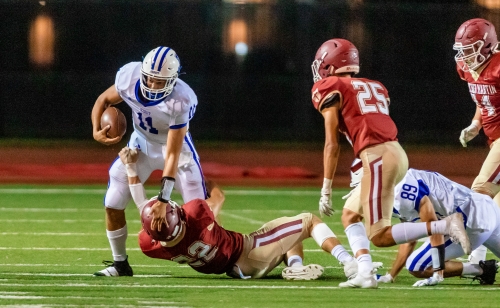 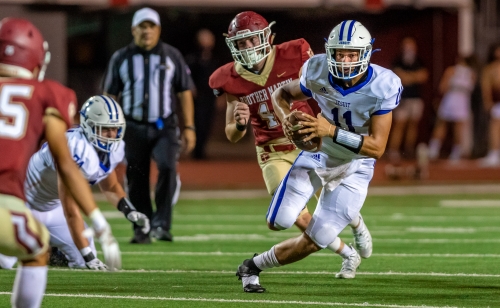 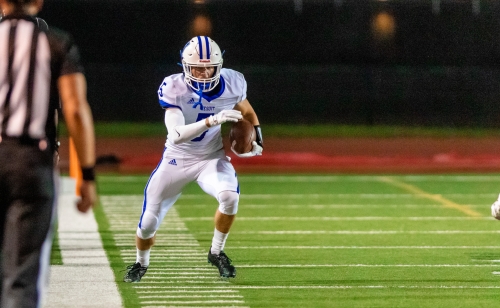 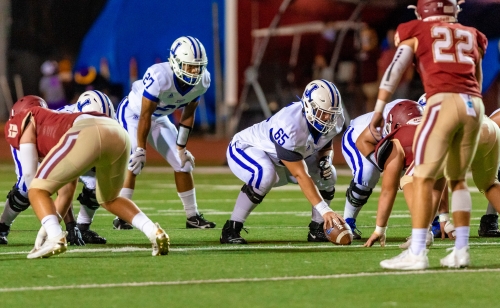 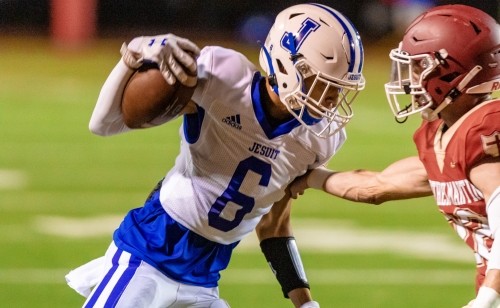 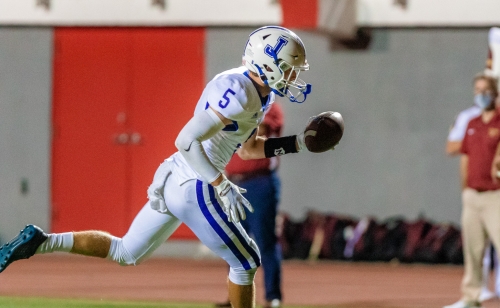 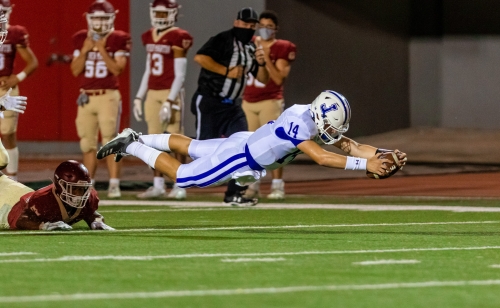 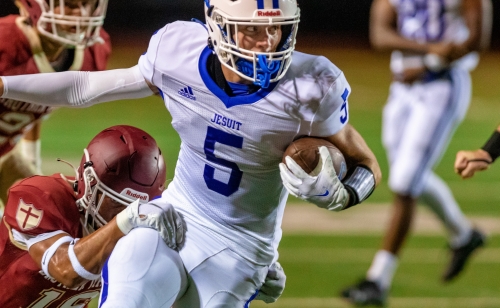 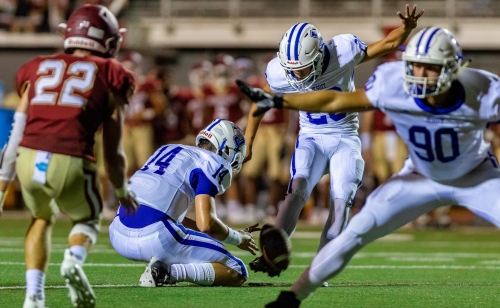 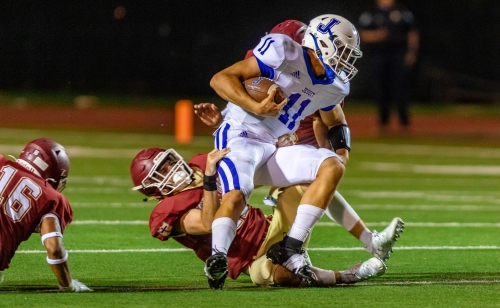 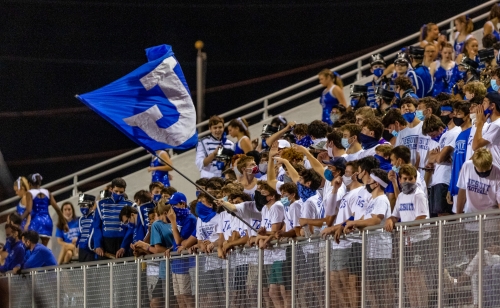 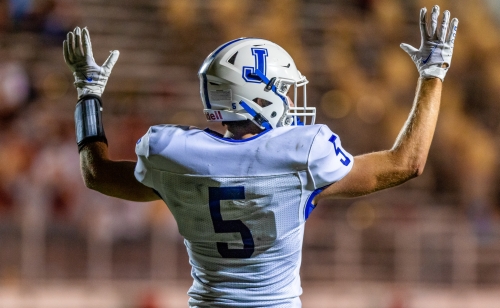 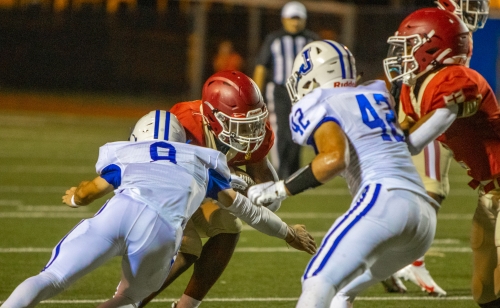 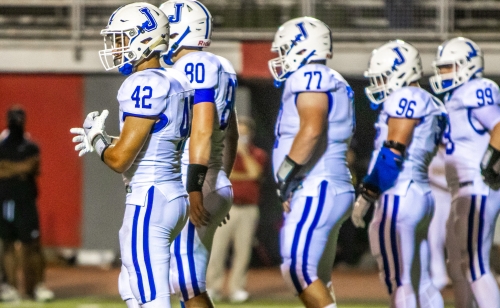 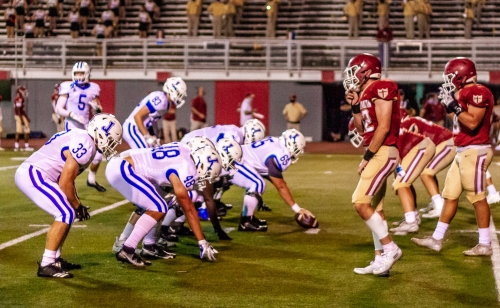