Unfortunately, Jesuit (4-3, 2-2) was unable to capitalize on receiving the ball first in the second half. The Jays’ opening 3rd-quarter possession, it could be argued, was their last chance to keep up with the top-ranked team in the state of Louisiana. CrescentCitySports.com lists John Curtis (7-0, 3-0) first on its Top 10 rankings with Rummel ranked third. The Jays face Rummel for their final game of the regular season, with games at Shaw and Hahnville preceding it.

Jesuit quarterback Grant Jordan, who was just named the Player of Week 6 on multiple platforms, struggled at times facing the stout Patriots defense. Despite his struggles he once again found the end zone with his arm and his feet. Jordan hit Luke Besh on a nice rollout pass in the first half and scored on a quarterback sneak in the second half. Besh snagged his fourth touchdown pass on the season, matching his junior class counterpart Luke LaForge. And Besh can thank LaForge for that touchdown, as it was LaForge recovering a muffed punt to set up the score. “The Lukes” now have four touchdowns and more than 400 receiving yards each. 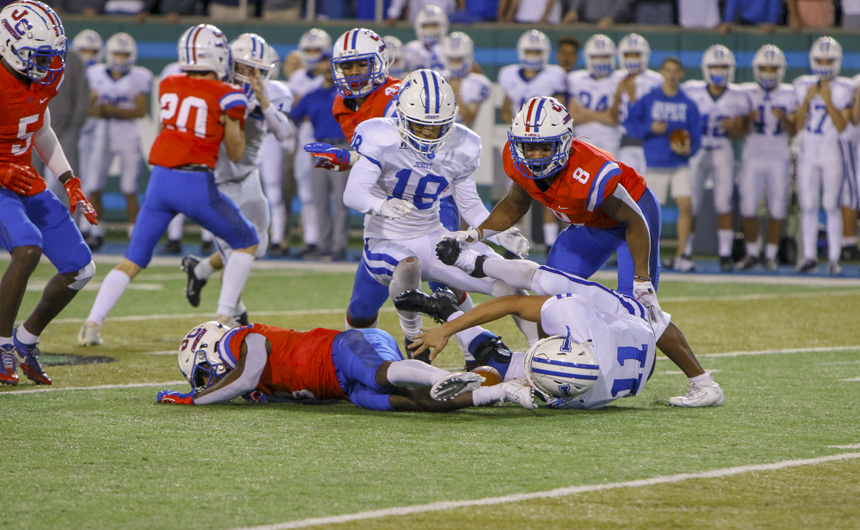 Will Hawkins (#18) stares at the football as Luke LaForge (#11) reaches out his hands to recover the muffed punt. “Jays’ Ball!”

View the Photo Gallery from the Jesuit-Curtis Football Game

“Our guys played hard, and I’m really happy with our effort,’’ Jesuit head football coach Mark Songy said. “We made some mistakes that we couldn’t overcome against a really talented team. But I’m always proud of our team.’’

On the road again, Jesuit (4-3, 2-2) travels to Joe Zimmerman Stadium to face Archbishop Shaw. The Jays and Eagles kick off at 7 p.m.

CrescentCitySports.com | Business as usual for John Curtis in victory over Jesuit