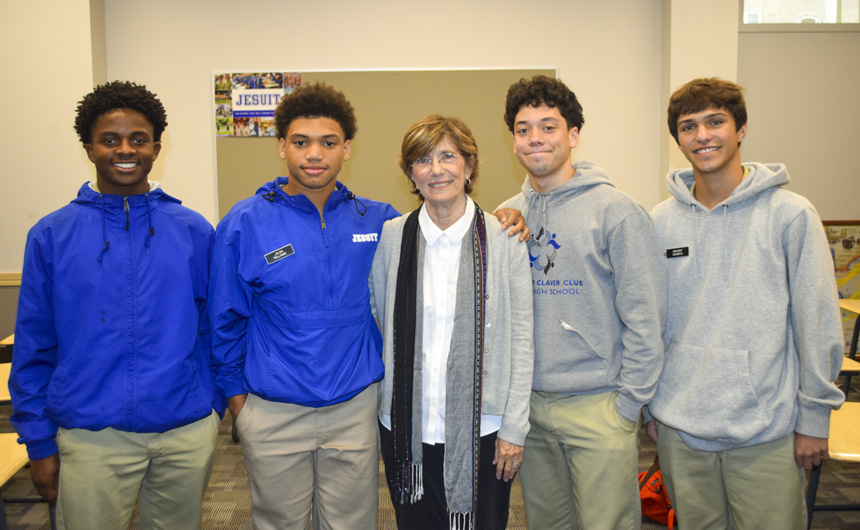 Born in rural southeast Missouri, Howell found her way to LSU for her undergraduate work and then to New Orleans for law school at Tulane. Her love affair with the city and its music led to several high-profile legal battles, most notably on behalf of the city’s Mardi Gras Indian culture. But the work that really thrust Howell into the spotlight was her advocacy for victims of police misconduct and civil rights violations.

During New Orleans’s tricentennial celebration, Howell was featured in the Times-Picayune’s “300 for 300” series, which said that Howell “has never lacked for work, or backed down from a fight…she has for years worked tirelessly to keep a check on the people in power, and to remind them of the power of the people.”

The St. Peter Claver Club was able to book Howell thanks to a connection. Her grandson, junior Jalen Williams, was recently elected as an executive member at large for the club.

Howell spent of good deal of her limited time during lunch on Wednesday talking about her involvement in reform efforts within the New Orleans Police Department, but she also made a strong case for pursuing a career that aligns with one’s moral compass.

“I think that may have resonated the most with the boys,” said club moderator Jay Combe ’83. “Honestly, I don’t think she even needed to say it. The whole time, she just radiated a passion for what she does. You could tell she’s happy and fulfilled, despite doing a tremendously difficult and often demoralizing job. I think it was great for the boys to see that.”

Despite all of her personal accomplishments, these days Howell is probably best known as the basis for the character of Toni Bernette on David Simon’s HBO drama series Treme, which chronicled post-Katrina life in New Orleans.

“I have to remind people all the time that’s not me,” Howell laughed.