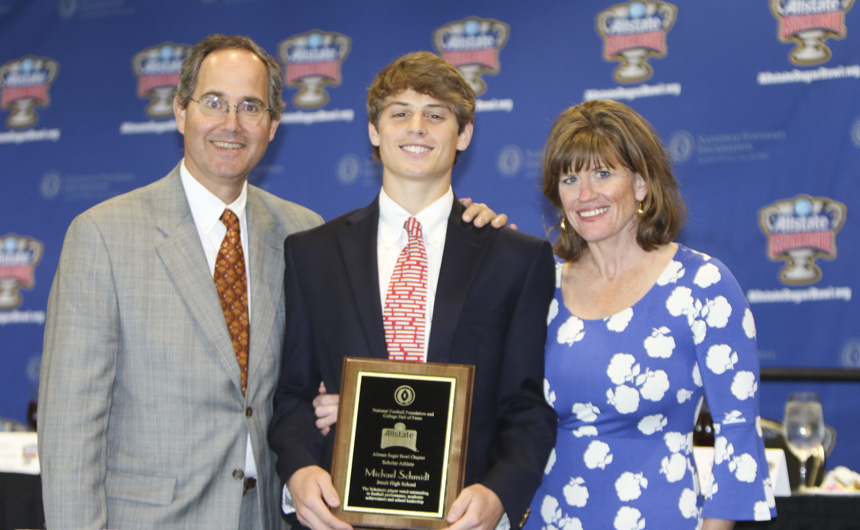 The National Football Foundation (NFF) honored one Blue Jay football player and 28 other student-athletes from around the metro area at its annual Scholar Athlete Awards Luncheon. The event, which is presented by the Allstate Sugar Bowl, was held Tuesday, May 7, at the Mercedes-Benz Superdome.

Senior Michael Schmidt was recognized for his efforts, both on the football field and in the classroom, by Archie Manning. The former Ole Miss and Saints quarterback serves as the national chairman of the NFF and the College Football Hall of Fame.

Schmidt’s high school résumé is well-deserving of this honor and extends far beyond his role as a defensive back on the football team. His academic achievements include the Honor Roll, National Honor Society (Vice President), Sociedad Honoraria Hispanica, and being named a WGNO Scholar Athlete of the Week. He was a three-year letterman in both football and lacrosse, and was named all-district in lacrosse. And finally, his vast extracurricular achievements are the following: Student Council, Campus Ministry, Jesuit Service Corps, Peer Support, Big Brother, Mu Alpha Theta, Urban Farming Club, and a member of the PLEASE Foundation.

Video highlights of the event are available at crescentcitysports.com.