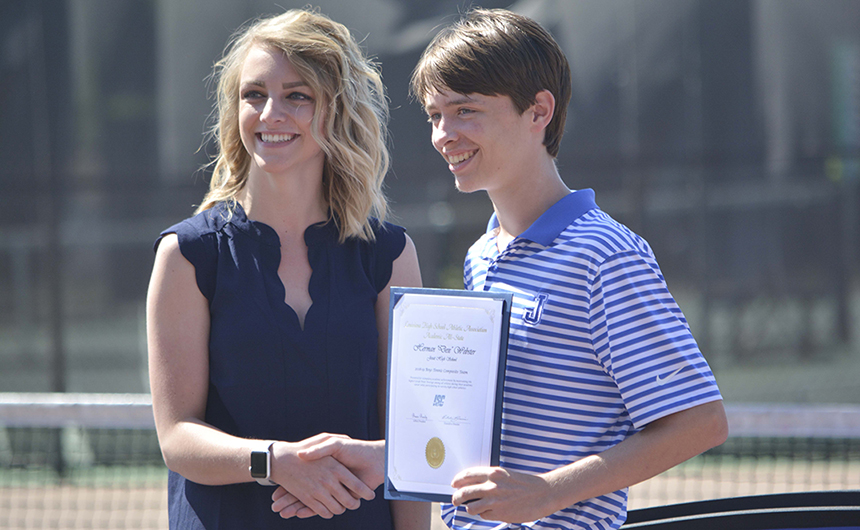 Dexter Webster receives a certificate recognizing him as a member of the LHSAA Academic All State team.

Led by strong performances at Line 1 singles and doubles, the Jesuit tennis team claimed third place at the LHSAA Division 1 State Championships on April 26 & 27 in Monroe.

Jesuit’s Line 1 doubles team of James Henican and Nick Crockens advanced all the way to the doubles semifinals, eliminating Brother Martin’s Line 2 team in a thrilling third-set tiebreaker in the quarterfinal round. In that tiebreaker, Henican and Crockens clawed back from a 7-4 deficit and held off a match point before prevailing 11-9.

Jesuit’s Line 2 and 3 doubles teams each won two matches to advance to the quarterfinal round. The Line 2 team of Dexter Webster and Pierce Westbrook took out a regional champion from Ruston on their way to the quarterfinals. On Line 3, Wes Melito and David Webster lost only two games while dispatching opponents from St. Amant and Barbe .

All three Jesuit doubles lines would eventually lose to either Catholic High’s Line 1 or Line 2 doubles teams, who would eventually meet in the finals. Largely due to that doubles dominance, Catholic won its third consecutive state title. Brother Martin finished second.

In singles play, Jojo Sandoz survived a first round scare against a foreign exchange student from Thailand playing for East Ascension, winning a third set tiebreaker by a score of 10-5. He then cruised through his second round match against Ruston before falling in the quarterfinals to Fontainebleau’s Gabriel Martin, the eventual runner-up. Sid Trouard, Jesuit’s Line 2 singles player, chalked up a point for the Jays with a first round win against Destrehan before losing to Barbe’s Aiden White in the second round.

Dexter Webster was named to the LHSAA All State Academic team.