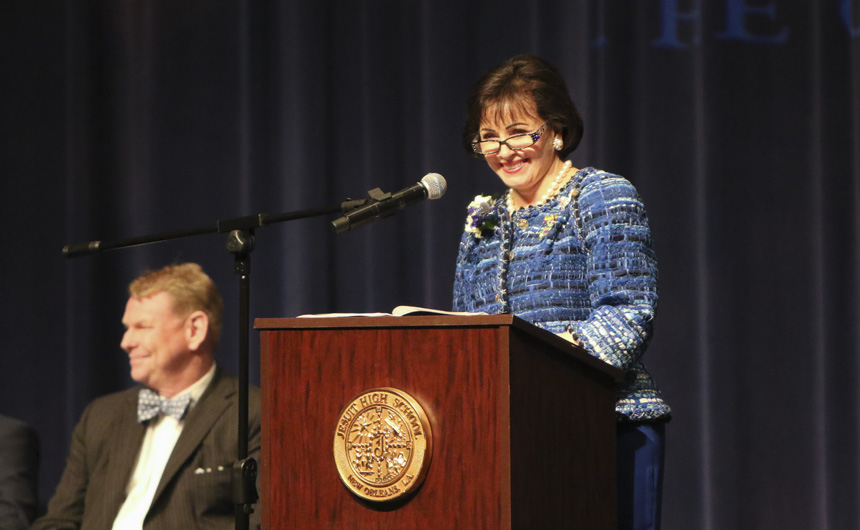 Gayle Benson shares her connection to Jesuit High School before the announcement of a $5 million donation from the Gayle and Tom Benson Charitable Foundation.

The Gayle and Tom Benson Charitable Foundation announced a pledge of $5 million, which is the largest gift in school history. Soon thereafter, Jesuit president, Fr. Christopher Fronk, S.J., announced more remarkable news – an anonymous challenge pledge, which will add another $5 million to the campaign when it reaches the $25 million mark. In essence, the challenge practically matches gifts pledged to the campaign before the end of the calendar year, dollar for dollar.

Watch the Video of the Capital Campaign Kickoff

Minds & Hearts Enlightened is the most ambitious capital campaign in Jesuit’s history. The goal of the campaign is to raise $30+ million to modernize Jesuit’s campus as it approaches its 100th anniversary at the corner of Carrollton and Banks.

The pacesetter phase of the campaign has been ongoing since October 2017, with one-on-one visits to high-capacity donors yielding tremendous results. The Benson gift brings the total amount pledged to the campaign to date to an incredible $18.2 million from 270 donors. 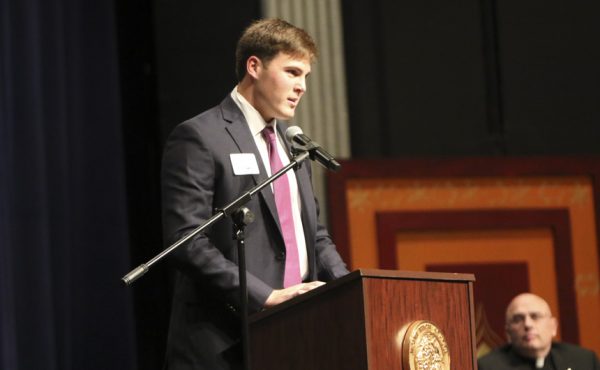 Representing the student body, Langston Goldenberg speaks to the crowd about his excitement for the kickoff of the campaign.

The kickoff event on Thursday began with presentations in the Jesuit auditorium. Hundreds of members of the Jesuit school community took their seats as Fr. Fronk opened the program with the campaign prayer. A short video then shared the vision for exciting capital improvements which the campaign will fund.

Following the video, longtime math teacher Leslie Merritt recognized the many faculty and staff members present and announced their participation rate at 100 percent, contributing through financial means, volunteerism, or prayer. Jesuit senior Langston Goldenberg spoke next, acknowledging the leadership of the school’s three presidents – the late Fr. Raymond Fitzgerald, S.J. ’76, Fr. Anthony McGinn, S.J. ’66, and Fr. Christopher Fronk, S.J. – who have worked to advance the vision of the campaign. Then, John Zollinger ’85, the president of the alumni association, called on the alumni as a group to continue to support Jesuit in its growth to develop young men who will lead the community to the future.

Next, Dennis Lauscha ’87, president of the New Orleans Saints and Pelicans and Dixie Beer, spoke movingly about how the Jesuit mottoes of Ad Majorem Dei Gloriam (For the Greater Glory of God) and Men for Others have been guiding principles of his life and career. Those principles were ideals for Lauscha’s boss and mentor, Tom Benson, and are principles he admires in current Saints owner, Gayle Benson, whom he introduced. 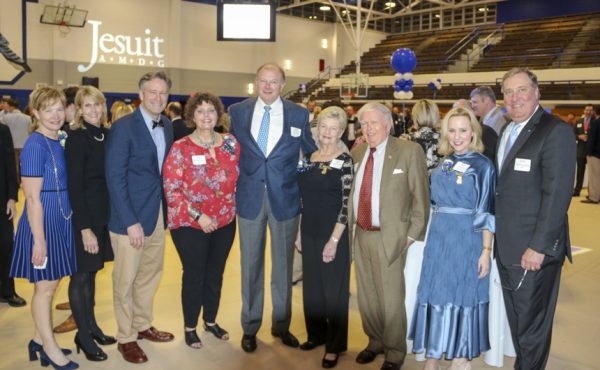 Enjoying the reception are Campaign Honorary and Operational Chairs Missy Duhon, Karen and Peter DeBlieux, Liz and Terry Creel, Paulette and Frank Stewart ’53, and Jennifer and Dennis Lauscha ’87. Not pictured are operational chairs Gerald Duhon ’85 and Yvonne and Jeremy Mancheski ’90.

Mrs. Benson graciously commended the character of generations of young men that pass through the halls of Jesuit and the transformative education they receive, saying, “If there is one thing we know about Jesuit, it is faith that drives their success.” She further explained that the core values of a Jesuit education are rooted in caring for others, finding the good in all things, and the unity of the mind and the heart, the whole person. She added, “The rich history of this school is unparalleled, and the many lives impacted are countless. That is why giving this donation today to Jesuit High School is so easy.”

Fr. Fronk then announced that Jesuit’s gym will now be known as the Gayle and Tom Benson Arena. He then thanked the many campaign chairs and the faculty and staff for their tireless work for the success of the campaign. After describing the scope of the campaign stretching well beyond New Orleans, he announced that the campaign is at the $18.2 million pledge mark and invited members of the community to support the efforts.

After the presentations, guests enjoyed a tour through the Hall of Honors to see the progress of the rebuilt classrooms and ended in the newly-named Gayle and Tom Benson Arena for a reception.