Take away the first minute of the game, and the first half would be described as a tightly contested, physical match in which neither team could crack the scoring column. Include the first minute, when describing the final outcome, and it is safe to say the St. Paul’s Wolves found everything they needed before most fans found their seats. Just 53 seconds after kickoff, Jesuit surrendered a free kick that saw a well-placed ball turn into a beautiful header goal.

The No. 2 Blue Jays accepted the runner-up title after falling 3-0 to the top-seeded Wolves in the 2019 Allstate Sugar Bowl LHSAA State Championships on Saturday night at Louisiana-Lafayette’s Cajun Field. While it was hard to stand during the trophy presentation, Blue Jays showed their class, clapping for the Wolves as they received their state title.

Saves certainly made the difference this year, just as they did in last year’s classic title match that saw Jesuit defeat St. Paul’s with a golden goal at the sound of the final whistle. A season ago, it was Jesuit’s defense and goalkeeper saves that changed the game. In this game, the Wolves’ keeper made the difference. In the 32nd minute, Gabe Sims’s header was barely saved by goalkeeper Trace Roberts. That was the goal the Blue Jays needed to gain momentum and come out of the halftime locker room with a clean slate.

St. Paul’s second goal came early in the second half on another header by the same Wolf who scored the first one (Michael Dufour). Dufour earned a hat trick in the 54th minute with a successful conversion of a penalty kick, capitalizing on some defensive miscues to salt things away at 3-0. The Jesuit offense came alive in the final 20 minutes, attacking the goal with headers from close-range throw-ins by Ashton Perkins and set pieces by Chris Tadros. And while their attempts to score were close and aggressive, they all fell short and came too late in the game.

View the Photo Gallery from the Jesuit-St. Paul’s Soccer Final 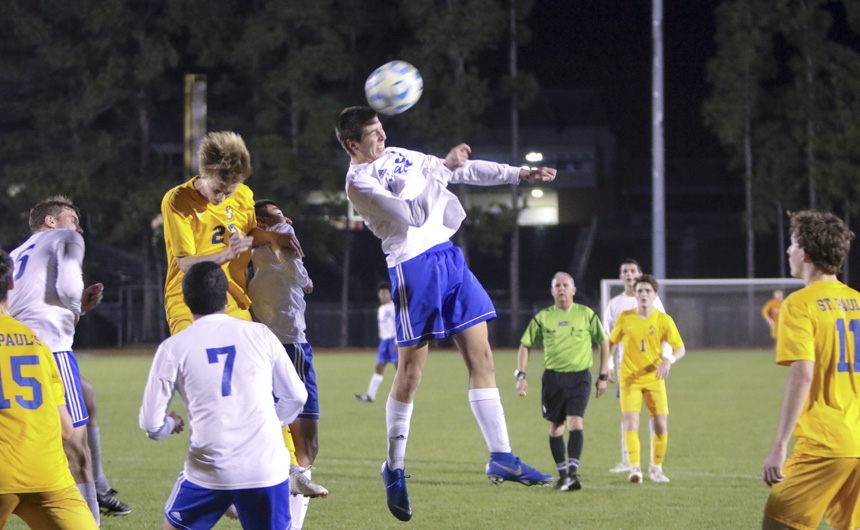 Sophomore Noah D’Aunoy leaps for a header during the final minutes.

View the 2019 LHSAA Boys’ Soccer Playoff Bracket for Division I.

“It’s hard to judge a season on the very last game, ” head coach Hubie Collins said. “Certainly, what all the seniors and every player below them did—I tip my hat off to them because they were absolutely fantastic. This will leave a sour taste in their mouth, which can be a learning opportunity…a life lesson. And those guys who are returning next year will remember this moment and work hard to be back at this final game next year.”